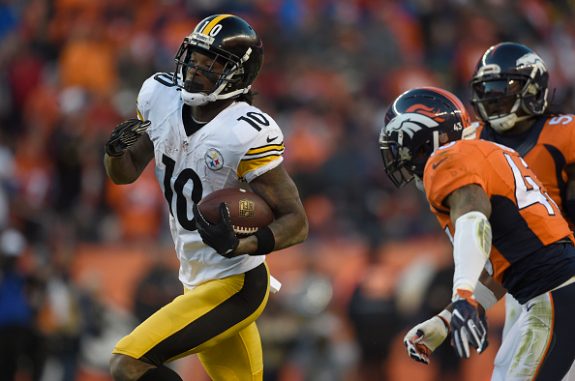 Steelers wide receiver Martavis Bryant says he wants to remain with the team in 2018 and will be ready for OTAs according to Jeremy Fowler of ESPN.

2017 should have been the final year of Bryant’s rookie deal but the contract rolled over to 2018 after Bryant was suspended from the league for an entire season in 2016 for drug-related reasons.

Frustrated with taking a back seat to rookie Juju Smith Schuster, he tried to force his way out of Pittsburgh around midseason and was suspended by head coach Mike Tomlin for Week 8 due to behavior detrimental to the team. He returned following the Steelers’ Week 9 bye and settled into a steady role down the stretch, catching 50 passes for 603 yards and three touchdowns on the year.

The Steelers might be open to trading Bryant this offseason but it seems more likely he will return to play out his contract. Extremely talented and still only 26-years-old, the former fourth-round pick out of Clemson is a major bargain at his scheduled 2018 salary of $705,000. If the Steelers do try to move him, that talent could tempt multiple teams in need of speed at wide receiver.

Roethlisberger Ends All Doubt: He Will Return to the Steelers in 2018
Steelers Coaching Staff to Head Up the AFC in the Pro Bowl in Orlando