Big Ben to Strike Back According to Fantasy Site 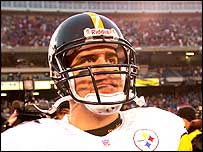 Top Fantasy football site FFToolbox.com has written about Steelers QB Ben Roethlisberger, and thinks that this season will be a big one for the Steelers signal caller. Below is their comments in an article called “Ben Strikes Back”.

Ben Roethlisberger is coming off an interception (and injury) laden season, but there are high hopes that a new offensive coordinator will help the young signal caller revert to his earlier form. Under the Cowher regime, Roethlisberger played in a controlled offense that limited the young quarterback’s options and win or lose, his stat line was frequently humdrum. Last season, while dealing with the injuries and some pass protection issues, he tossed a career-high 18 touchdown passes; but also had 23 interceptions and had an anemic 78.1 passer rating. Big Ben and new OC Bruce Arians spent the offseason rewriting the Steelers’ playbook to give the QB more options (and that could make him a sleeper in fantasy leagues this season).

With a strong running game in place – Willie Parker had a breakout season with 1,494 yards, third most in Steelers history and Arians touted the run blocking – the Steelers have a base with which to work, while updating their passing attack. Hines Ward might have slowed down a bit, but he remains one of the more versatile wide receivers in the league. Santonio Holmes came on strong in the second half and tight end Heath Miller provides an over-the-middle target. With the pieces in place and a rewritten plan of attack, Roethlisberger should break the 20 touchdown barrier and be considered a potential fantasy starter or high-end backup.

Steelers with Interest in Awful Aaron Brooks?!
Don’t Look for Too Much in Steelers Hall of Fame Game Showdown