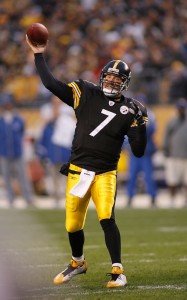 Want Big Ben to sit this week against the Chargers? Don’t count on it. Ben Roethlisberger took the field today per usual with his team, practicing and zipping passes across the field. Not that there was ever much doubt for coach Mike Tomlin that Ben wouldn’t be the starting QB Sunday vs the Chargers, but the fans have spoken out and quite a few have stated it’s time for Roethlisberger to sit.

This comes after Sunday’s outing against a 24-20 loss against the Colts in which Ben threw two critical picks that resulted in 14 Indy points. He also threw a third pick on the last play of the game in which he threw a Hail Mary to the end zone that almost fell into the hands of WR Nate Washington.

Roethlisberger has thrown 8 picks and just one TD over the past three games, two of which have been losses at home. One reason that Tomlin thinks there has been issues is the on and off again practice schedule that Ben has been on with his bum shoulder. “I think it’s important that you practice and get physical reps,” Tomlin said. “The reality is that as we go on, we recognize the value of practice and what the physical reps mean to us as an offense.”

Last week Ben didn’t practice with the team till Friday, and there was plenty of talk even last week that he would sit and Byron Leftwich, who played well against the Skins, would get the start.

Parker to be Back at Practice Wednesday
Report: OL Smith Done for the Rest of 08