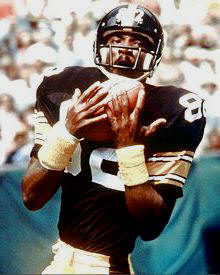 There’s a name that all Steelers fans know that is close to coming about as one of the new investors of the team – Hall of Fame WR John Stallworth.

Art Rooney II said last week that there was a “very recognizable name” coming aboard, and Stallworth is that name.

Stallworth was approved at Monday’s league meetings, along with two other investors — Bruce V. Rauner, Chairman of GTCR Golder Rauner, and the Varischetti family of Brockway, Pennsylvania.

James Haslam III, the Paul family, and Thomas Tull previously have been approved by the league.

The Steelers also announced that the closing date for the restructuring of the ownership of the team has been moved from March 31, 2009 until May 2009, and the release implies that additional investors could be added.

Under the structure of the new ownership – Dan Rooney and Art Rooney II will own 30 percent of the franchise, the McGinley family will continue to own 20 percent, and the new investors will own a total of 50 percent.