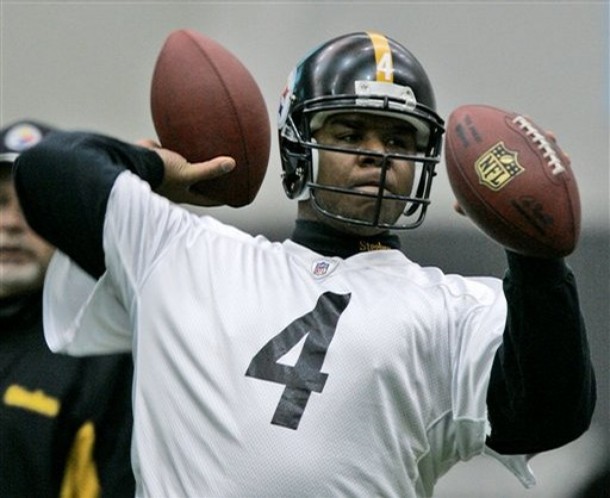 The backup QB spot for the Steelers just got a lot more interesting, as last years backup to Big Ben – Byron Leftwich, has decided to take a spot with the Tampa Bay Buccaneers. Leftwich last season played a big part in a pair of games for the team, making a couple of big plays in the wins over the Redskins and Browns.

He started for the Jaguars from 2003-2006, but was released by the team nine days before the start of the 2007 season. From there he went to the Falcons, but was a bust and joined the Steelers last preseason after Charlie Batch went on injured reserve.

The Steelers had offered Leftwich a two-year deal, but he took the same deal with Tampa Bay, a deal that reports say includes a big roster bonus in 2010, which really means it’s a one-year audition for the QB. “I’m excited to get down there,” Leftwich said. “They have a lot of weapons.” He will compete with Luke McCown, Brian Griese and Josh Johnson for the starting job.

The move to Tampa Bay means that the Steelers will have to look elsewhere for a backup QB. They could give the role to Dennis Dixon, who came to the team via the draft last season, and was the #3 QB most of the season. They also could get Batch back, who is a free agent as well.

While the team wanted Leftwich back, he seems to feel that he at some point will start with Tampa Bay, which at the end of the day had to be the clincher in the decision to head back to Florida.