With the Draft Six Days Away – Who Do you Want? 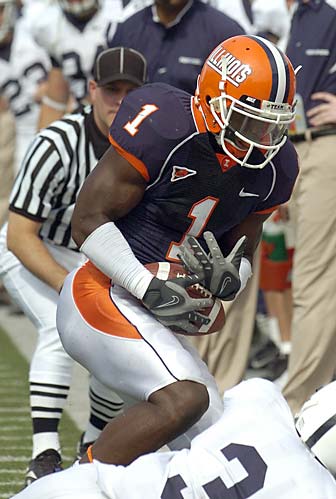 There are lots of great players that will be coming out in Saturday’s NFL Draft, and the Steelers sit at #32 after a Super Bowl Championship. There appears to be a number of players that will be around, and here are a few that the team could find themselves choosing from come Saturday:

Mack is the best center prospect to come out of the college ranks in quiet a while. Excellent pass blocker with good balance and technique. Is not fast (timed at 5.15 in the 40) or explosive but knows where to be. Despite lack of speed, he is quick inside. Moves well inside the tackle box. Has great balance and is a natural pulling and trapping. Find and engage defenders on the second level. Takes good angles and is an able cut blocker. He has been relatively injury free for much of his college career. Is an outstanding leader who commands respect inside the huddle.

On the downside, Mack is not the best run blocker out there. Although he understands the position and has good sealing technique, he does not sustain his blocks well. Is somewhat of an ineffective drive blocker. Has below average footwork.

A three time All American at Cal, Mack certainly has the pedigree NFL teams coveted. He is a very athletic and active inside lineman who could be moved to guard at the next level. A mid to late first round talent who has the talent and desire to develop in to a top notch NFL guard.

Strengths: Good height and athletic build with room to bulk a little in the weight room … Very instinctive; reads and reacts without hesitation … Very fluid hips; nice body control … Has the recovery speed and initial acceleration you look for; no questions athletically … Competitive and plays with a swagger … Anticipates routes in press man coverage … Physical and can play bump-and-run … Smart … Three-year starter and has experience … Solid work ethic … Will be a better pro than college player … Outstanding Senior Bowl week in Mobile … Lots of undiscovered potential.

Weaknesses: Needs to put forth more effort against the run … Soft tackler and needs to do a better job of reading an opponent’s hips, key in, and explode through in regards to tackling technique … Should have produced more interceptions; ball skills need to be closely evaluated … Lacks awareness in zone.

Summary: If Malcolm Jenkins runs poorly at his Pro Day, then is viewed as strictly a safety, and the NFL front offices seriously question Vontae Davis’ intangibles, Darius Butler could be the first pure corner off the draft board. I am not lying here; I am confident Butler goes off the board much higher than people expect in that 14-24 range. Do not overlook this talented player just because he does not have the Internet hype of Jenkins and Davis.

Britton is a durable, consistent performer who’s solid in many aspects of the game. He has great size, long arms and mauls the opposition at the line. He has good balance and uses his hands effectively. He moves well laterally, despite not possessing the quickest feet, and uses his wingspan to force defenders off their course of action. He’s a solid run blocker. – Chris Steuber, Scout.com

Vontae Davis is the younger brother of San Francisco tight end and former top ten pick, Vernon Davis. Athleticism obviously runs in this family, because both of the Davis brothers are freakishly strong and fast. Vontae is coming off an impressive sophomore campaign that saw him smother even the best receivers the Big Ten has to offer. Davis finished the season with 76 tackles, 4 tackles for loss, 4 interceptions, 8 passes broken up, and he even blocked 2 kicks on special teams. Other than Malcolm Jenkins, Davis is the best defensive back available in this year’s draft. Davis has the potential to put up an untouchable amount of reps on the bench press, and possibly run in the high 4.3 range in the 40. Davis had a down year by his standards, but Illinois’ abysmal pass rush didn’t make his job any easier. He recorded 78 tackles, 7 tackles for loss, 2 interceptions, 10 passes broken up in coverage, and 3 forced fumbles during the 2008 campaign. During his time at Illinois, Davis has improved drastically. He has gotten to the point where opposing defenses have virtually stopped throwing in his direction; cutting the field in half for offenses. He would be a great fit for an aggressive team because he’s an excellent blitzer. Davis is just as comfortable rushing the passer from the corner spot as he is in coverage. Davis is a sure fire first rounder this year, and shouldn’t slide past the top 20 for any reason.

Vontae Davis solidified himself as a first round pick at the NFL Combine in February. He was the only one of the top corner prospects to run a sub 4.5 40 yard dash, clocking in at a slightly underwhelming 4.49 seconds. He looked fluid enough during position drills that scouts think he can be an All Pro cover man if he improves his technique. His 25 reps of 225 pounds on the bench press also encouraged scouts that he has the strength to press even the biggest receivers at the NFL level.

Vontae Davis continues to show the athleticism necessary to be a shutdown corner in the NFL. He lowered his 40 yard dash time to 4.4 seconds at his Pro Day workout. Opinions are mixed on Davis, but he could go anywhere from eighth to somewhere in the twenties depending on how certain teams feel about him.

Steelers’ Draft Preview
Bills Parrish to the Steelers? Be Careful What you Believe