Sepulveda Still Strugging from Surgery to Get Back on the Field 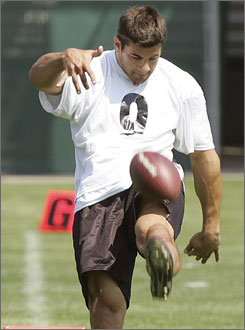 Happy with the punting game for the Steelers in 2008? Me neither. Of course with that said, everyone fully expects lefty punter Daniel Sepulveda to be back and ready to go in 2009, but so far, he’s yet to take the field in practice. The Post-Gazette reported that he has yet to resume punting after having surgery to repair his torn ACL in his right knee.

Steelers punter Daniel Sepulveda, who kicks with his left foot, has yet to resume punting after having surgery last year to reconstruct his right knee after tearing the anterior cruciate ligament, but he is the prime candidate for this season since Berger, an unrestricted free agent, did not receive a contract offer. After being drafted in the fourth round in 2007 — almost unheard of for a punter — Sepulveda delivered a promising rookie campaign. The 41.2 percent of his punts that landed inside the 20 yard line ranked fourth in the league.

I thought last season was a disaster in the punt game, as Mitch Berger was not all that great, and Paul Ernster was worse. If the team has any thoughts that Sepulveda is not going to be able to start the season, or not 100 percent, the team should do their due diligence to go out and get a punter that can be productive, which Berger and Ernster were not last season.