Steelers Should Focus on Getting TE Miller a New Deal 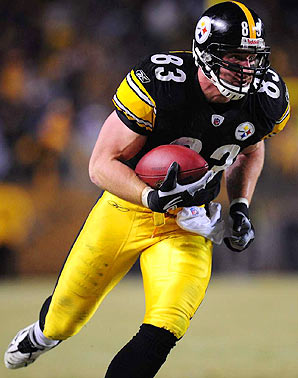 As the Steelers figure out what to do with the little bit of money they have under the salary cap, one thing they should start to focus on is trying to get tight end Heath Miller under a new deal. As pointed out in today’s Beaver County Times, Miller, who set a career high with 48 grabs last season for 514 yards and three TD’s, is only set to get paid $800,000 in 2009.

Here is what the Times reported today about Miller and what’s going on in his mind:

If Max Starks is the Steelers’ No. 1 priority right now when it comes to contract extensions, then tight end Heath Miller is No. 2. Miller is under contract to make $800,000 in base salary this year. Really, he’s underpaid for what he means to the team as a blocker and clutch pass catcher. “I’m not really worried about something I have no control over,” Miller said. “That’s why I have an agent. “The reason I’m here right now (at organized team activities) is to get better. That’s all I’m worried about right now.” Miller was asked, “If you were a betting man, what are the odds you’ll have an extension before the start of the season?” “I can’t answer that,” he said. “I’m not a betting man.”

Miller has been a workhorse for the Steelers, playing in 62 of 64 possible regular season games, and he always seems to come up with the big catch when needed. He’s Big Ben’s security blanket, and has come up with some clutch plays over the last four seasons. He’s probably the number one target of the team when it comes to getting him a new deal, and he deserves it.