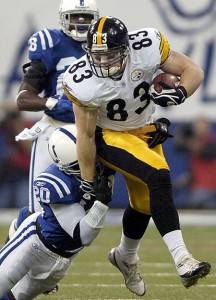 There was some early doubt about the Steelers bringing back tight end Heath Miller after this season. Put those doubts to rest. Miller, maybe the best TE in Steelers history, inked a six-year deal with the club on Wednesday, meaning once camp starts he won’t have to talk about where he may be playing after the 2009 season.

The deal which Miller gets will keep him in black and gold through the 2014 season. He was entering the final year of his rookie deal, which he signed after being the teams first-round pick back in 2005.

At 6-foot-5, 256 pounds, Miller is the perfect tight end for the Super Bowl champs. He can block, and also can make big catches, such as his big play early in Super Bowl XLIII that put the ball on the Cardinals one-yard line, or his touchdown in the third quarter to cap off a huge drive in the divisional playoff win over San Diego.

Sure the Steelers could have put a tag on him this next offseason, but it’s good they just went ahead and got a deal done now to avoid any issues and any hard feelings. Miller will come into the 2009 season having started 61 games in the regular season and all eight postseason games the Steelers have played since he came into the league.