Roethlisberger Makes It Known He’s at Camp to Play Football 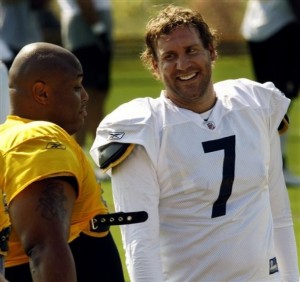 Ben Roethisberger could have shown up in Latrobe and made excuses for being distracted considering he’s facing a civil lawsuit. Instead, the two-time Super Bowl winning QB made it clear that he’s focused on one thing – playing football and playing winning football in 2009.

Here’s some quotes from the Steelers QB as camp opened with two practices in Latrobe:

(How it feels to be back) – “I feel good. The arm is going to be sore this afternoon but it was good, it was fun. It’s good to get out here with the guys again and see some of the rookies in pads and see how they play.”

(on 3rd Round pick WR Mike Wallace) – “You know he is really fast, we are just going to focus on catching the ball.”

(on Limas Sweed) – “He is doing well. We are moving a lot of our guys around and we are trying to give them different chances. We are moving Santonio (Holmes) into the slot a little bit, but it’s going to be good. It’s going to be hard for him this training camp to learn multiple positions but I think they are all up for the challenge and I think they will all be good.”

(On missing center Justin Hartwig, who is out with a toe injury) – “I am pushing to get him back as soon as I can just to have my center in there. We don’t want to rush him because we don’t want him to get hurt any worse.”

(on the team inking TE Heath Miller to a six-year deal) – “I am really glad. When Heath first got here I told him I think we are going to be here together for a long time and we are. To me Heath does not get even close to the credit he deserves. He is one of the best, if not the best, all-around tight ends in the game. He doesn’t get that credit because he doesn’t put up the big numbers. If you ask anybody that goes against him or anybody on this team, anybody that knows tight ends they will tell you how good he is. He was very deserving of what he got. I am glad he is gong to be with me for a long time. He is a pretty good player.”