Accuser in the Roethlisberger Case Says She’s Being Harassed 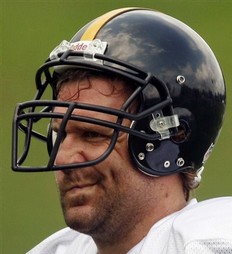 There’s more stuff flying against the wall in the Ben Roethlisberger case, as now Pro Football Talk is reporting that the accuser in the case says that she’s getting harassing phone calls due to her filing the claim:

The woman who has accused Steelers quarterback Ben Roethlisberger of sexual assault claims claims that she has received harassing phone calls in the wake of the filing of a lawsuit against Roethlisberger and various employees at Harrah’s hotel and casino.

According to the Associated Press, she has filed a report with the Douglas County Sheriff’s Department, alleging that “well over 100” annoying messages have been left for her.

The messages allegedly have called her a “whore,” and some have said that “something’s going to happen” if she doesn’t drop the lawsuit.

This outcome potentially could have been avoided, if her lawyer had filed the case “under seal” or if her name had been concealed under a “Jane Doe” pseudonym. We opted to initially identify her name because: (1) no criminal complaint was filed; (2) no steps were taken in filing the lawsuit to conceal the woman’s identity; (3) the information regarding the suit that was posted on the court’s web site described the case as a “defamation” claim and not a claim alleging sexual assault; and (4) the initial written statement issued on behalf of Roethlisberger identified the woman by name.

The situation likely was exacerbated by Roethlisberger’s decision to conduct a press conference during which he angrily called the claims “reckless and false.” The assertion from Nobel Laureate James Harrison that “it’s just a frivolous situation where someone is trying to make some money” didn’t help, either.

Enough strange things have already come out about the woman in this case, as we have documented, so this now coming out is not much of a shock. At the end of the day, I’ll still stand by the fact she’s gonna get paid, and this whole thing is going to go away.

Forget About the Steelers Running the “Wildcat” Offense
Stapleton to Have Surgery on Knee; Out for An Indefinite Period of Time