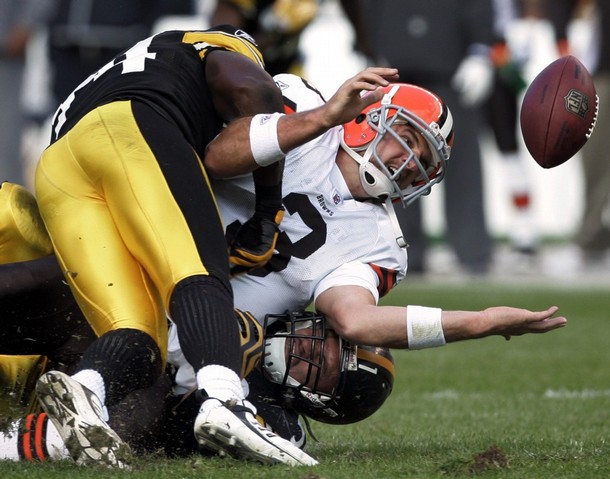 Steelers head coach Mike Tomlin makes no bones about the fact the Steelers have to get better, but Sunday at home against their “rivals” from Cleveland, the team that hoisted the Lombardi trophy a season ago sure looked like they were making strides, stopping Cleveland 27-14. The win was cemented by the Steelers offense, which went wild for 543 yards, led by 417 yards passing by quarterback Ben Roethlisberger.

Big Ben was 23-for-35 for the 417 yards and two touchdowns. The Steelers had two players (Hines Ward and Santonio Holmes) with each over 100+ yards receiving, and tight end Heath Miller had 80 yards. They also had 140 yards on the ground, this despite the Browns desire first to stop the ground game.

The Steelers though had their moments of looking sloppy though, as in the third quarter they two fumbles and an interception sandwiched between two Browns turnovers as they could have put the final nail in Cleveland’s coffin. They were able to get things under control in the fourth quarter, as they added a field goal to their 24-14 lead to make it 27-24, then Ryan Clark picked off a Derek Anderson pass to end the final Cleveland threat.

Anderson was better than his 2-for-17 outing a week ago against the Bills, but did have to put up with some heavy pressure against the Steelers, and didn’t complete his first pass till about five minutes had passed in the first half. He was 9-for-24 for 122 yards with a pick and a touchdown. Josh Cribbs played quite a bit for Cleveland in the “wildcat” and also threw a pick in going 0-for-2 with an interception.

“A lot of things were done at a high level,” Tomlin said. “But of course we continue to fall short of perfection. We got some critical stops, we’ll take the win and move forward.”

The Steelers went up 14-0 on TD passes from Roethlisberger to Miller and Ward, but gave 7 right back when Cribbs returned a kick 98 yards to make it 14-7. They were able to convert a field goal before half to make it 17-7. The Browns took the kickoff to start the third quarter and went 66 yards in six plays and wrapped it up with a one-yard pass from Anderson to fullback Lawrence Vickers to make it 17-14.

Pittsburgh though came right back, as Roethlisberger led his team on a six-play drive that covered 79 yards, and wrapped up with RB Rashard Mendenhall going over from two yards out to make it 24-14. “I don’t even think we know how good we can be,” Roethlisberger said about the offense. “Truth be told, I think we have to keep striving for excellence.

The Steelers have a tough test next week, as they take on the undefeated Minnesota Vikings at Heinz Field at 1pm Sunday.