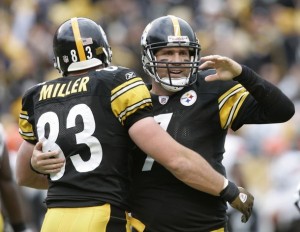 Pittsburgh quarterback Ben Roethlisberger threw for a season-high 417 yards, just 16 shy of his career-best 433 against Denver on November 5, 2006. It also was the third-highest total in Steelers history. “I don’t even think we know how good we can be here,” Roethlisberger said. “Truth be told, I think we have to keep striving for excellence. … Wide receiver Hines Ward collected 159 yards on eight receptions for his best game in three years. It was his 23rd career 100-yard game and extended his streak of games with a catch to a team-record 168. … Fellow wideout Santonio Holmes also topped the century mark with 104 yards on five grabs. … Heath Miller became the Steelers’ all-time leader in touchdowns by a tight end with 25, surpassing Eric Green. He also made his 200th career catch. “That is the best I’ve ever seen (Roethlisberger) play,” Miller said. “He’s had full command for a few years now, but he just keeps getting better and better.”

The Browns appeared to stop the Steelers on a fourth-and-1 play in the first half, but referee Walt Anderson ruled that Pittsburgh had gained just enough yardage to convert. “It touched the plane of the stake because that’s what I’m looking at,” Anderson explained. “If the nose of the ball touches the stake, then it’s a first down. But we don’t actually put the stake up against the nose of the ball because of the way the ball is shaped. The chains and stake are laid beside, so it kind of depends on the angle you might be looking at it from.” Mangini was not satisfied with the ruling, sternly saying, “Not my call. It’s not my call. There is nothing I can do about it.”

Wide receiver Joshua Cribbs broke Cleveland’s franchise record for career return touchdowns with his eighth, running back a kickoff 98 yards for a score in the second quarter. Eric Metcalf held the previous mark with seven. “The fans stressed all week to me that they wanted a (TD) return,” Cribbs said. “I get up for games against the Steelers anyways, so that return was for the fans.” … Cribbs finished with 132 yards on three kickoff returns, 45 on six rushes and 26 on one punt runback. He also became the 20th player in NFL history to amass 7,000 combined return yards.

Browns wide receiver (and Ohio State product) Brian Robiskie made his first pro reception on a 23-yarder in the fourth quarter – two periods after he accidentally landed out of bounds on what would have been a first-down grab in Pittsburgh territory. “There’s definitely a learning curve in the NFL,” the Browns’ second-round draft choice said. “I think the biggest thing for us is to not get comfortable and to continue to grow and learn each day.”

Browns linebacker D’Qwell Jackson left the game with a shoulder injury and did not return. Mangini said his status will be updated on Wednesday. … Cleveland tight end Robert Royal also was banged up, re-injuring his sore foot. That left the recently signed Greg Estandia as the only healthy TE on the roster and forced guard/center Hank Fraley to play the position on a number of plays. … Pittsburgh safety Troy Polamalu returned to action after missing a month with a knee injury and promptly intercepted Derek Anderson in the first quarter. The Steelers are 15-3 when Polamalu makes a pick. “It was good to see him back out there,” Pittsburgh coach Mike Tomlin said. “Good to see him with the ball in his hands.”

The Heinz Field sellout streak remained intact with a crowd of 64,398 in attendance. … Kickoff conditions were 42 degrees under mostly sunny skies. … The Steelers wore their classic black tops and gold pants, while the Browns sported white shirts and brown pants. … Penguins owner (and NHL legend) Mario Lemieux took part in a pregame ceremony saluting the city of Pittsburgh for being named the Best Sports City in America by The Sporting News. … Also on hand for Steelers Alumni Weekend were 25 former players, including Super Bowl XL hero Jerome Bettis, Walter Abercrombie, Matt Bahr and Dwayne Woodruff.

Dulik can be contacted at brisports@hotmail.com