Could RB Leon Washington be a part of the Holmes deal? 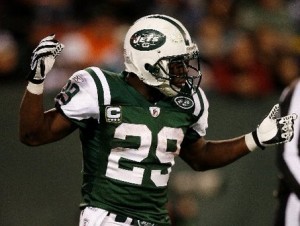 A fifth round pick? That’s it? I mean, you have to admit, a former Super Bowl MVP and a wide out that is just 26 years old should have netted the Steelers a heck of a lot more than just a cheap fifth round pick – right?

Well, not so fast, as could there be more to this deal? There’s a rumbling over at Pro Football Talk that says running back Leon Washington may in fact be headed to the Steelers as part of the deal, problem is Washington can’t be part of any deal till he signs his tender with the Jets, and he’s yet to do that.

Here’s the tidbit about Washington from the PFT website:

There are rumors flying in the wake of the trade that sent receiver Santonio Holmes from the Steelers to the Jets that the compensation package includes both a fifth-round draft pick and running back Leon Washington.

Though we’re not yet prepared to declare with 100 percent certainty that this rumor is off the mark, it’s highly unlikely that Washington would be part of the deal. In order to be traded, Washington must first sign his restricted free agency tender offer. Given the apparent speed with which this deal transpired, it’s unlikely that Washington inked the deal before the Steelers and the Jets worked out their trade.

Now if the Steelers find a way to get their hands on Washington in this deal, that changes things BIG TIME. Washington is 27 years old, and can do a number of things to help the black and gold. He can run back kicks, catch the ball out of the backfield, and can run the ball as well.

I’ve always like Washington, and while it looks bad with him fighting with the Jets right now over money, maybe he would come to the Steelers with a chip on his shoulder like another back that came to town on draft day back in 1996 named Jerome Bettis. Now don’t get me wrong, Washington is never going to be “The Bus,” but where the Steelers are at right now as a team and as an offense I really think Washington could be an asset.

Now we’ll have to see if there’s any truth to the rumors, or if that’s what they really are – just rumors.

Let the Message be Heard Loud and Clear
Poll: Reaction to the Santonio Holmes Trade