Mendenhall says a Fullback would be a welcome sight 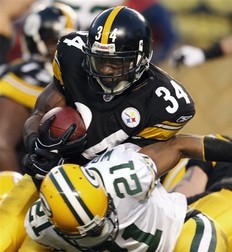 A couple players in the past that have been and were solid fullbacks for the Black and Gold, opening holes for the likes of Jerome Bettis, Eric Pegram, Barry Foster and others.

Now the Steelers feature back is former first-round pick Rashard Mendenhall, and coming into the 2010 season, there’s no doubt the Steelers have at least talked about running the ball a whole lot more.

So where does a fullback fit into the picture? Count Mendenhall in as a player that would like to see the Steelers employ a blocker. One name that comes to mind to fill the hole – Frank “The Tank” Summers, whose rookie year in 2009 was cut short due to a back injury.

Mendenhall had a solid season after the team realized that Willie Parker couldn’t handle the load and wasn’t the same player he was a few years back. All Mendenhall did was rush for 1,108 yards and seven touchdowns. Imagine what he could do with someone opening holes for him like Summers.

“Frank’s starting to pick up on things and things are becoming more natural for him,” Mendenhall said. “He played a lot of running back so he can see and feel those things out.”

Maybe it’s time to get back to power football, otherwise known as “Steeler Football.” It would be a welcome sight for Mendenhall.