Scouting the Enemy: #15 in the AFC – Buffalo Bills 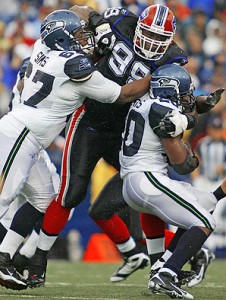 In a new feature here on Steelers Gab called “Scouting the Enemy,” we will look at all 15 AFC teams, and give a glimpse of what each one brings. At the end, we will talk about any type of connection they have to the Steelers, including if they play them in 2010.

The Good – C.J. Spiller, the teams first round draft pick, has the makings of being a pretty good NFL back. They have already said they will find a way to get him the ball quite a bit. The team still has Fred Jackson and Marshawn Lynch to carry the ball as well, making this a team that looks like they can be one of the top rushing teams in football. They have a top punter in Brian Moorman, who was given a contract extension before last season. Rian Lindell scored 108 points last year, not missing a field goal from 39 yards in. Chan Gailey should have a more focused team in 2010.

The Bad – This team is a cluster you know what at the QB spot. They have some talent, but no direction. Trent Edwards, Ryan Fitzpatrick and Brian Brohm are all coming in thinking they are the #1 QB, but at the end, they all may have a turn under center before the year ends. If Aaron Schobel retires, which he seems to be leaning towards, it will leave a huge hole at the ROLB spot. Marcus Stroud fell from 13 sacks in 2008 to just 7 last season. The fan base is growing tired of excuses.

Steeler Connection – The teams meet in late November, going at it on the 28th of November at Ralph Wilson Stadium. By then it wouldn’t be a surprise to see the team being 3-7 or at best 5-5. If the Steelers play to up to their level, they should dispose of the Bills when they meet.

Cole: Steelers With the Best LB Core in the NFL
Scouting the Enemy: #14 in the AFC – Oakland Raiders