Scouting the Enemy: #10 in the AFC – Denver Broncos 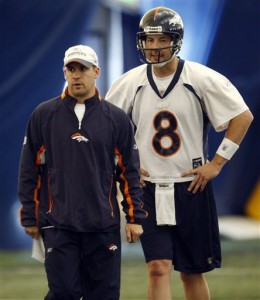 The Good – Kyle Orton is a QB that manages the game, and does not make a ton of mistakes. Wide out Eddie Royal had a solid rookie year, but struggled last year with just 37 catches, but is right now the #1 WR on the roster and should be better in year three. They still have one of the better pass rushers in RLB Elvis Dumervil, and Champ Bailey is one of the best CB’s in the business. The team also got a solid first season from former Eagle safety Brian Dawkins. Kicker Matt Prater scored 122 points in his second full season as the teams kicker in the high air of Denver.

The Bad – They traded their biggest playmaker in Brandon Marshall, and the run game is not much to talk about, as Correll Buckhalter is right now the top back. Josh McDaneils had the mojo early as the team was 6-0, but then the air quickly came out of the balloon, and they went 2-8 over their last 10 games. There will be plenty of pressure to rush rookie QB Tim Tebow in the lineup, but former Browns first-round bust is still ahead of him on the depth chart. There’s not a ton of playmakers on this roster right now.

Steeler Connection – Last year on a Monday night the Steelers exploited the Broncos, winning rather easily in Mile High. It was the last Steeler win before the 5-game collapse by the Black and Gold. This year the teams play in the what is the biggest preseason game on the slate, that being in week three in Pittsburgh on Saturday, August 29th. The game at Heinz Field can be seen nationally on FOX.

KFFL: Mendenhall Should Score Between 9 and 11 TD’s in 2010
Steelers Toying with the Idea of Adding Owens?