Scouting the Enemy: #9 in the AFC – Tennessee Titans 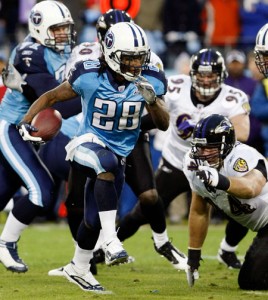 The Good – They have a game breaker at the RB spot in Chris Johnson, and he can change a game in the matter of seconds.  They also have the ongoing saga of Vince Young, sometimes very good, sometimes very bad.  The team got off to a slow start last season, but once Young got in as the starter, they were a lot more explosive and think that will carry over to 2010.  Kenny Britt is an up and coming 2nd year wide out.

The Bad – If Young is off his game, he can throw multiple picks and if you get in his head you can totally disrupt the Titans game plan.  The defense has some youth to it, and you can get yards and points off of them, both on the ground and through the air.  The O-line is a growing unit, and could have some growing pains and can be exposed for their youth.

Steeler Connection – The Steelers beat them in week one last season in the kickoff of the 2009 season, as it began an early season disaster for Tennessee which ended once Young moved into the starting role.  This season they meet early in the year again, this time in Tennessee, and it will be without Ben Roethlisberger, so it will be interesting to see if the Steelers can win on the road in a tough place to play without their QB.

Steelers Toying with the Idea of Adding Owens?
Scouting the Enemy: #8 in the AFC – Miami Dolphins