Plenty of Questions at the WR Position as Camp Opens 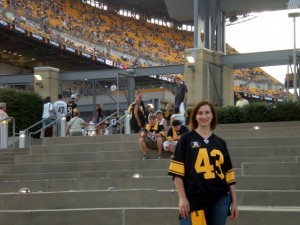 Steelers Gab is proud to have our new guest columnist – Steelergurl join our staff! She will be providing her unique look at the black and gold throughout the season. You can read her site at www.Steelergurl.com.

It’s almost August – what does that mean to you? To me, it’s a time to go back to dorms, cafeteria food and football all day every day. OK, well, it’s not the first two for me, but it is for the Steelers. It’s training camp. Finally.

If you are betting on football this year you need to check out BetQL for updated NFL over unders, expert picks, and injury updates.

There’s so much to consider this year, a ton of mending from all the off season drama. But it can be done. Mike Tomlin will make sure of that. Over the next couple weeks, I will go through some of the top training camp battles and who I think will make the final roster of 53.

This is both my favorite time of year and yet, I hate to say goodbye to those who work their butts off trying to live their dream. That said, I am going to start this series with the offense, focusing first on the wide receiver corps.

When the Steelers first announced the trade of Tone to the Jets, I think most of Steeler Nation was shocked, though not necessarily surprised, if that makes sense. I don’t think any of us could ignore that Tone was a great receiver but had some character flaws, at least for the Rooney standards.

But all that doesn’t negate the fact that he had an outstanding couple seasons with the Steelers. He will be missed. But he can and will be replaced. And Mike Wallace is the likely replacement for Tone. While faster, he doesn’t necessarily play the game the same way. He’s a deep threat, especially with his speed, but we’ll need the offensive line to keep Leftwich/Dixon (and I will cover this competition in a separate post) upright long enough to get the ball to him. I look for Wallace to have a big year and nothing less.

Hines and Randel El are the veteran keystones (pun intended) to the passing game. Both know the way the Steelers play and reports say Randel El is playing almost like he never left. Yes, we forgive him already. Hines has always been under rated in my opinion.

It’s not often you find a receiver who can catch consistently for 1,000 yards a season (or close to it) and block and make room for plays the way he does. The opposing defense has to watch out for Hines, and as a mentor, he’s teaching the young receivers how to play the same way. Some call it “dirty” – I call it smashmouth!

Playing hard for that #3 spot will be Emmanuel Sanders and Antonio Brown. I don’t know much about Brown, but I heard he’s turned the coaches heads from the start. But I will say that I know that Sanders has spent the off season in Pittsburgh working out and watching tape, trying to get his head start in knowing the Steelers game. I expect the battle between these two rookie players to be nothing but hard work and guts – both wanting to solidify their spot on the roster.

Following up and trying to win a spot, more likely on practice squad will be Tyler Grisham, Brandon London and Isaiah Williams. Thing is, training camp always has surprises. That’s why it’s tough to call the roster prior to seeing what these guys can do on the field, in pads, in real situations.

Who do you think the standout wide receivers will be this season?