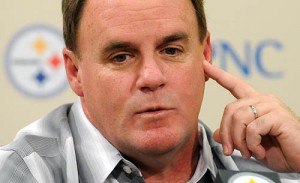 First it was Mike Tomlin, and now Kevin Colbert.

In a good move by the black and gold on Wednesday, the team came to terms on a five-year extension for Director of Football Operations Kevin Colbert.

“We are very pleased to announce that Kevin Colbert will remain with the Steelers for at least several more years,” Steelers’ President Art Rooney II. “Kevin is without question one of the best in the NFL at his job and we are fortunate that he will continue to lead our football operations into the future.”

Colbert has been with the Steelers for the last 11 seasons, and currently oversees the team’s player personnel and scouting departments.

Since his arrival in 2000, the Steelers are 103-56-1 (.643), with six division titles. Pittsburgh is 10-4 in the post-season over the last 10 seasons, winning two of the franchise’s six Lombardi Trophies (XL, XLIII). Colbert, a Pittsburgh native, previously worked in the Detroit Lions personnel department.

Now that both he and Tomlin are locked up, the next thing is to go against the grain and get something done with LB Lamarr Woodley. The Steelers have said they don’t want to give Woodley a new deal until his rookie deal is done, but that is bull headed and they need to get him locked up now before this anger he has lands him with another team in 2011.

Plenty of Questions at the WR Position as Camp Opens
Timmons: “I’ve Been Working Out Like a Dog”