Preseason Rewind: What We Learned From the Steelers 24-17 Win Over the Giants

The Steelers are 2-0 in preseason after a 24-17 win over the New York Giants at the new Meadowlands Stadium on Saturday night. There were plenty of positives to talk about in the win, and plenty of game balls to give out as the team was a lot more impressive in their latest win than they were last Saturday at home against the Detroit Lions.

Here are some thoughts, good and bad, for the Steelers in their 7-point win against one the big boys in the NFC East.

1. For the 2nd straight week Dennis Dixon was the best Steeler QB on the field, and once again is making a huge case to be the starter over Byron Leftwich when the season kicks off. Dixon led a solid QB threesome for the Steelers and went 7-for-8 for 82 yards, and made things happen with his feet when the play broke down a few times. Dixon seems to know that the QB spot remains up for grabs, and is bent on getting the call to start against Atlanta on September 12th. It’s hard to beleive after these two games he won’t be.

2. The run game put up 161 yards on 41 carries, a solid 3.9 yards per carry average. They helped out an offense that had 412 yards to 280 for New York, and 8 different Steelers logged rushing attempts, led by Justin Vincent who had 37 yards on 6 carries, an average of 6.2 yards per carry. Rashard Mendenhall did have some issues going backwards on a few plays, but the O-line did a much better job opening holes against the Giants on Saturday night, and it showed with some big runs.

3. Rookie Antonio Brown did a good job on kick returns. His night could spell the end for Stefan Logan, as Brown looked sharp in going for 50 yards on two kick returns, and he had a nice 18-yard punt return, and had four punt returns for 43 yards. Brown looks like the real deal as a wide out and a kick returner, and could be a big player for this team in 2010.

4. The D laid some big hits on the Giants. It looked as if the defense was a little unhappy about the Lions having success agianst them last week, and they took it out on the Giants. All night you heard names like Farrior, Foote, Clark, Fox and others stepping up and making some rather big hits. It was good to see the Giants gain less than 300 yards of offense, and they were held to 3-of-10 on third downs while the offense was 6-for-12. 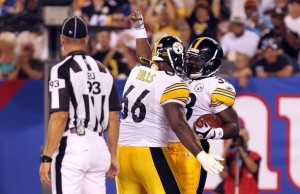 1. Stupid move a few minutes into the game by Ike Taylor to get himself thrown out. What exactly do you have to prove in a preseason game that is so important it makes you get tossed? Taylor has simply got to show more maturity, and there’s no excuse for him to be throwing punches at any player. He’ll pay for it with a tongue lashing from Mike Tomlin, and a solid fine from the NFL.

2. While kick returns with Antonio Brown were pretty good, the kick return coverage was again an issue, as Aaron Ross took back a punt 45 yards for the Giants. This was a huge area of concern for the Steelers entering camp, and watching that 45-yard punt return brought back a lot of bad memories from a season ago. It’s an area they HAVE to fix.

3. Can someone tell me what exactly that was at the end of the first half? You don’t have a time out, and your within the five-yard line and you run Mewelde Moore basically off tackle? Where exactly is the logic in that? Then of course the clock ran out and the team wasn’t even able to trot Jeff Reed out for an extra point field goal attempt. The coaches have to be smarter than that – right?

Leftwich Hates the Jags; Loves Being in Pittsburgh
Tomlin Happy with the Night from Roethlisberger