Tomlin Happy with the Night from Roethlisberger 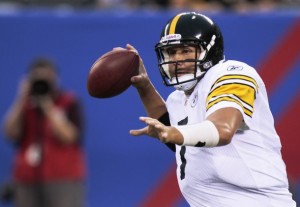 Ben Roethlisberger saw his first action of the preseason last night and most felt that he played well as the team came out with a 7-point win over the New York Giants.

Roethlisberger completed six of eight passes for 76 yards and led the Steelers on a long drive that ended with a field goal. It was his last drive, and he hit consecutive passes of 13 yards to Heath Miller and 17 yards to Antwaan Randle-El to get Pittsburgh a first and goal.

Mike Tomlin following the game seemed pleased with the effort from his QB who will have to watch the first four games after being suspended by commish Roger Goodell.

“You know it was the first time out for him, I thought he did some nice things,” Tomlin said. “He moved good, it was a good start.”

Roethlisberger did throw a pick, and had to leave the pocket a couple of times and try to make throws due to some protection breakdowns. Other than that though, he looked like the same QB that has led the team to two Super Bowls the last five seasons.

As far as if Ben is going to play much next Sunday in Denver against the Broncos, Tomlin says there is a plan, but didn’t give many more details other than that.

“I’m going to look at the tape and analyze it and all the performances of the guys and give the group what we think the group needs,” Tomlin said. “Staying inside the framework that we have all been discussing since we checked in. We want to have a productive training camp and preseason and get the other guys ready to play.”

Byron Leftwich and Dennis Dixon also played in the Giants game, with again Dixon being the top performer, leading the team on a pair of TD drives. Leftwich though had a long touchdown throw to Mike Wallace, and seemed a lot better than the week before against the Lions.

Battle Wants to Show What He Can Do on Special Teams and at WR
Poll: Two games into the preseason, do you think Dennis Dixon should start opening day?