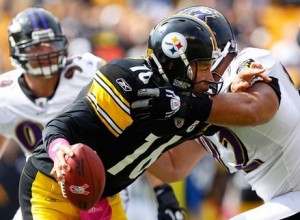 Well, we knew that it wouldn’t be easy, and we were right. It was a pretty nip and tuck first half, a couple big plays, and with it the Ravens lead the Steelers 10-7 in a rather even affair.

To me the Ravens did have the better half, but the Steelers have to just get back to playing their game and getting more pressure on Joe Flacco in the next 30 minutes. With that, here’s my thoughts on the first half.

1. Not enough pressure on Flacco – The Steelers pass rush has not done enough to get to Flacco, and that is a credit as well to the Ravens O-line. Flacco was 13-for-20 for 145 yards and was sacked just one. The Steelers line and LB’s need to get to him more, and pressure him into a mistake or two in the second half.

2. TOP – When the Steelers are playing well, they win time of possession, but that hasn’t happened in the first 30 minutes. The Ravens have held the ball for 17:35 to just 12:25 for the Steelers, which is a big reason the Steelers are down. They need a few sustained drives to keep Flacco and co. off the field.

3. Trickery – Would love to see the Steelers offense cross up the Ravens with a trick play or two in the second half. Charlie Batch has been running more than usual in the first half, and it would be nice to see them try something to keep the Ravens D off the field.

Prediction – The black and gold just don’t seem to have the eye of the tiger today, and I don’t like it. The Ravens are playing better, are more crisp, and the big thing is they have held the ball for five minutes longer. The Ravens are going to send the Steelers to 3-1. Ravens 20 Steelers 13

PFT Florio’s latest attempt to get a rise out of Steeler Nation
Game Four: Late Defensive Collapse leads to 17-14 loss to Ravens