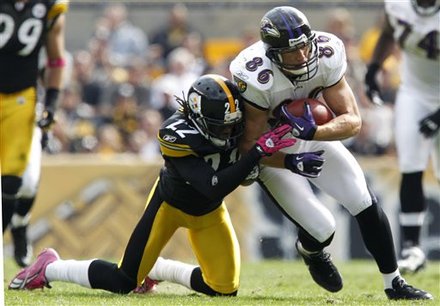 The good news – the suspension of Ben Roethlisberger is over and your are 3-1. The bad news – you were :55 away from being 4-0.

After playing almost perfect football for the first three weeks of 2010, the Steelers, and more so their defense, came crashing back down to earth in the final minute Sunday, allowing a late Ravens drive that cost the Steelers a 4-0 record as they fell 17-14.

The Steelers led 14-10, and held Baltimore on downs at the Steelers two with 2:40 to play. The Steelers decided to play it safe and run clock, and were forced to punt from the three with 1:08 left.

The Ravens took the ball over after a bad holding call on the punt at the Steelers 40, and Joe Flacco needed just four plays to drive Baltimore the distance, the final 18 yards coming on a double move by wide out T.J. Houshmandzadeh as he beat Bryant McFadden for the final dagger.

The four plays took just :21 seconds, and you could hear the wind go out of Heinz Field after all the emotion of what looked like a win just two minutes before.

Ray Lewis ended any doubts on first down as he picked off a Charlie Batch pass at the Steelers 36 to give the Ravens the ball back to down it for the win.

Batch did what he had to do, leading the team on a drive that covered 93-yard drive that went almost 7 minutes, and ended with a Rashard Mendenhall TD that could have been the margin of difference to make it 14-10.

Another key factor in the loss was the Steelers third quarter in which they had two turnovers from Baltimore, a fumble and interception, but Jeff Reed missed two field goals to keep the Ravens ahead 10-7.

The Steelers enter the bye at 3-1, but a loss to the Ravens is always tough to swallow, more so one that should have been a win like Sunday.