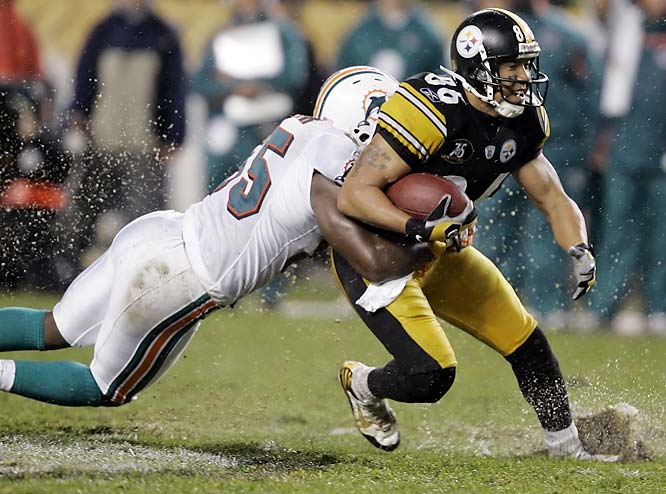 The Steelers make their second trip to Florida in 2010, this time to take on the Miami Dolphins, a team they played in the season finale last year. The Fins have lost their two home games, while they haven’t lost on the road. So I guess that looks good for this weekend as the Steelers look to move to 5-1 on the season.

1. Wake Up – Cameron Wake is having a big season for the Fins, and the Steelers are going to have to make sure to keep their eyes on him and contain him. More so for Ben Roethlisberger, who would love to have another game where he doesn’t suffer a sack, like last week vs Cleveland. The Fins would love to disrupt the Steelers pass game, and that starts with Wake, who has six sacks this year, and the teams LB core.

2. Keep the Fins two-headed RB Monster contained – Combined the two Dolphins RB’s are pretty good, as Ronnie Brown and Ricky Williams are putting up around 107 combined yards per game. They also can catch the ball out of the backfield, as they have a combined 15 grabs between the two. The Steelers have the best run defense in the game, and that will be tested Sunday.

3. Back to Ben being Ben – I can see Ben Roethlisberger finally getting back to being the Pro Bowl version of old this week, as I felt last week he was high and wide on a number of throws last week. Of course this is trouble for the Dolphins, and I think when Ben gets hot, which likely will be early as he’s a QB that loves to throw early and often, the Dolphins are going to have to be on their toes.

Prediction: The Steelers will play mad this week for what happened to James Harrison, and I think that means they will take it out on the Dolphins. They have won four in a row vs Miami, and they match up well with them on both sides of the ball. I think Roethlisberger is going to have a big game, and the defense will do enough to stop Miami and their offense for their third straight loss at home. Steelers 26 Miami 13