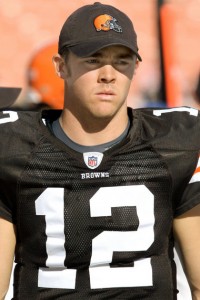 He’s back. Steeler fans have to be breathing a little easier today knowing that come 1pm Sunday their franchise QB will be back under center for a team that played very well in his absence.

In years past, Ben Roethlisberger has actually struggled in games where he has come back from injury in the past, but had two very good weeks of practice, so he and the defense should have no issues with the Browns. Or will they?

1. Deep Breaths early – The emotion of Ben’s return along with the fact the team is a two TD favorite makes for what should be an easy win. But with that comes the concern of the team playing a little TOO emotional early, and forgetting the little things that got them to 3-1. The Browns talent wise cannot match the Steelers, and while that will show up often on Sunday, playing within themselves should be key early for the black and gold.

2. Contain Cribbs – Josh Cribbs has had success against the Steelers in past seasons, from running in the wildcat in the teams 13-6 win over the Steelers last year, to a huge kickoff return for a score against them in the 2007 season. This year Cribbs has been pretty much quiet, but if the Browns are going to even stay in this game, they will turn to him, meaning the Steelers need to make sure to gang tackle and contain him every time he is around the ball.

3. Keep doing what you have been doing – The Steelers are 3-1, and to me, there’s no reason to start changing game plans or going outside the box to beat a team that is 1-4 and hasn’t proven to anyone that they are all that much better than last year when they were 5-11. The Steelers should rely on the run game, play sound special teams, and unleash the D on Colt McCoy and the lackluster Browns offense. That should be more than enough to get a win.

Prediction – I said in my picks 35-3, and I will stick to it. Trust me when I say the Steelers D would love nothing better than to lay a shutout on the awful Browns, but I think the Browns do just enough to get a field goal and walk out of Heinz Field 32-point losers as compared to 35. If the Browns even hang around in this game I will be stunned, and I think with everything going their way, the Steelers should have no issues going to 4-1. Pittsburgh 35 Cleveland 3