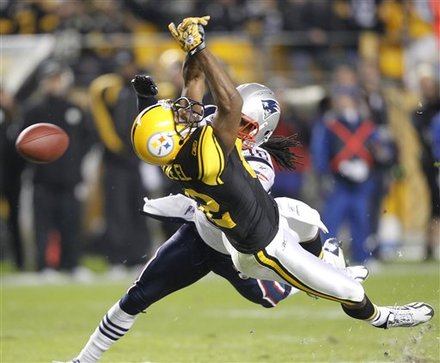 The curse of Tom Brady continues.

The Pats QB moved to 6-1 all time against the Steelers Sunday night, doing his usual pick apart routine of the Steelers defense, hitting plays all night as New England cruised past the Steelers in stunning fashion 39-26.

By all accounts, it was by far the worst game of the season by the Steelers, who felt this would not be another undressing by Brady after how the Browns easily topped the Pats a week ago in Cleveland.

Instead, it was frustrating from start the finish. The Steelers O-line was terrible, as injuries took their toll as Ben Roethlsiberger was rushed all night, and the run game did little against the Pats after they allowed over 200 yards last week to Cleveland.

While the offense was off all night, despite scoring 23 points in the fourth quarter when the game was pretty much out of reach, the defense played their worst game of the year is allowing Brady to throw all night.

The QB, who makes a living off of beating the Steelers at Heinz Field, threw for 350 yards on 30 of 43 passing. He was not sacked all night, and while there were points when the Steelers got pressure, Brady usually was able to find check downs.

Pats rookie TE Rob Gronkowski, who was a goat last week in Cleveland, scored three times for New England, including an 18-yard TD on the Pats first series, and then again in the third and fourth quarters.

Roethlisberger was sacked five times, and was under pressure most of the night. The run game did little, putting up 76 yards on 18 carries. Rashard Mendenhall had just 50 yards on 11 carries as the team couldn’t get anything going all night.

New England took a 10-0 lead in the second quarter, and finally the Steelers got a field goal to cut it to 10-3 when they got to the Pats four but had to settle for a Jeff Reed 22-yard field goal.

Then they had a shot late in the half, but couldn’t score, and then the game got out of hand when the Pats drove 78 yards in 10 plays to take a 17-3 lead and pretty much put the game away.

The Steelers had one last shot to get back in the game, and drove down the field to the Pats 8 with 3:47 left in the quarter, but they failed on third down, and then trying to get to 17-6, Reed’s awful season continued as he missed a 26-yard field goal.

A wild fourth quarter saw the team combine for 39 points, but in reality, it was nothing more than desperation for the Steelers, who couldn’t stop the Pats, and New England seemed to play back on defense, allowing Roethlisberger to march up and down the field.

The Steelers got to 29-18 and 36-26, but there was never really a point where you felt they were going to be able to stop the Pats and really challenge to get close to tying or taking the lead.

At the end of the day, it was their worst game of the year, and it came at a time when they really could have used a win, as it would have put them a game up on the Ravens, who lost Thursday, in the AFC North.

Roethlisberger ended the night 30 for 49 for 387 yards with three TD’s and a pick six. He was sacked 5 times for minus 38 yards.

About the only good note is the fact the other three AFC North teams lost, meaning that the Steelers and Ravens are tied for first at 6-3, the Browns are three back at 3-6, and the Bengals are 2-7.

Next week the Raiders, a team that stunned the Steelers at home last year in the midst of that five-game losing streak, are in town with a record of 5-4 and coming off a bye.