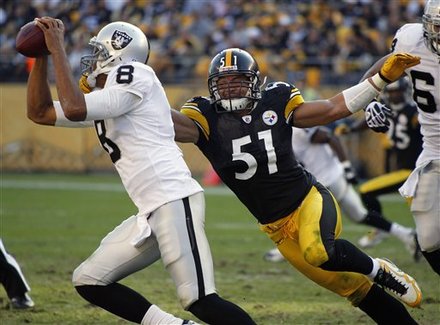 One week after being embarrassed at home by Tom Brady – again – the Steelers had their gut check of the season Sunday, and answered it with a complete beating of the Raiders at home 35-3.

The Steelers trailed 3-0, but came back after a slow start and ran all over the Raiders. They scored 21 points in the second quarter, controlling the quarter in making life tough for Raiders QB Jason Campbell.

The defense allowed in four second quarter possessions just 33 Oakland yards, in making them punt twice, forced a fumble and then end the half.

The Steelers offense came to life after two three and outs, as they had drives of 85, 56, and 35 yards in scoring three touchdowns to lead 21-3 at the break. Ben Roethlisberger threw a TD to Emmanuel Sanders, ran one in, and Ranshard Mendenhall ran in a 5-yard TD to give the Steelers a 7-3 lead.

The game was marred by some of the worst officiating seen in years in the league. Ike Taylor had a pick 6 taken away in the second half by an awful call of a personal foul on James Harrison, and overall the refs threw 14 accepted flags on the Steelers for 163 yards.

No matter what though, the Steelers D was as good as it’s been all season, and the offense was much more in sync after a couple early stumbles.

Roethlisberger was 18-for-29 for 275 yards, three touchdowns and a QB rating of 127.8. Mike Wallace had three grabs for 116 yards with a long 52-yard touchdown that made it 28-3 in the third quarter. Issac Redman scored his first TD as a pro late in the fourth quarter when he took a screen pass in from 16 yards out to make it 35-3 with 1:16 left.

The defense crushed the Raiders run game, which came in red hot. Darren McFadden was held to 14 yards on 10 carries, and Campbell was removed after being beat on a good portion of the day. He ended 7-for-19 for 70 yards with a pick, and was sacked four times for minus 32 yards.