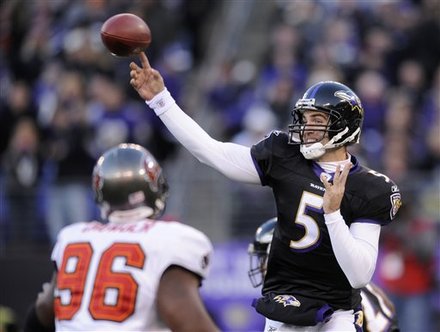 It gets no bigger than this. The two top teams in the AFC North battle for what could be the division title Sunday night, as the Steelers play their 7th road game of the season (5-1) at Baltimore, their arch rival. While not much needs to be said about this one, we’ll try to give some keys and our usual prediction.

1. Don’t Waste Plays – Five of the last six meetings between Pittsburgh and Baltimore have been decided by four points or fewer, which means that every play is important to say the least. Things like punt coverage and kickoff returns are important, and the Steelers would do themselves good to take advantage and win field position. They also need to make sure to tackle well, and not allow the slippery Ray Rice to have a big play like the play on 4th down last season in Baltimore, or like Fred Jackson did last week in Buffalo when he broke free for a score that got the Bills back in the game.

2. Confuse Flacco – Ravens QB Joe Flacco is on a hot streak to say the least – In six games since October 17th, Flacco has 13 TDs, two interceptions and a 111.6 passer rating – the league’s second-best in that stretch. If the Steelers are going to win this one, they need to force him to have a long night, and that includes disguising some coverages and making sure when guys like Lawrence Timmons and LaMarr Woodley get in the backfield, tackle Flacco, and don’t allow him to escape. Making it a long night for Flacco will be key in winning this game.

3. Take some shots with Wallace – Mike Wallace is the playmaker this season on offense for the Steelers. He has 12 receptions of at least 25 yards – second in the NFL. The Steelers are 10-1 when the second-year speedster catches a touchdown pass, and it would help spread the field a bit if Ben Roethlisberger can get some time and get a few down field shots to the young pass catcher. Even if it doesn’t result in a big play, it could lead to something else for an offense that needs to be careful and create some opportunities.

Prediction – The Steelers are 5-0 in their last five games vs the Ravens when Ben Roethlisberger is the starter at QB. He creates that escape ability that the team needs, and while his foot may hinder that, you can’t discount how important it is that he and the offense play well. You can bet that yards will be tough to come by, but with Roethlisberger in there, the team has a much better shot to win than without him. These two teams are so close, here’s thinking the Steelers make 1-2 more plays late to pull it out. Steelers 17 Ravens 16

Are the Refs Out to Punish Harrison?
Jeff Reed has a new team