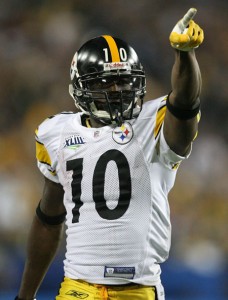 The Steelers are getting set to welcome a face they know all to well back to Heinz Field Sunday afternoon when the 10-3 AFC North leaders host the 9-4 New York Jets.

That face is the one of Santonio Holmes, a guy who had some great memories with the Black and Gold, but in the end couldn’t stay out of trouble off the field and the team dumped him for a 5th round pick this past offseason.

Holmes was moved to the Jets, and now he’s back to try and help his team get out of a serious slump, suffering back to back losses to the Pats and Dolphins.

Sunday it will be Ike Taylor going up against Holmes, and he says he has been impressed with what the former Super Bowl MVP has done for the Jets since coming off a four game suspension.

“Santonio came off his four-game suspension and is really doing his thing, turning into a man, coming up late in big games — three touchdowns I think in three games, game-winning touchdowns,” Taylor noted. “We know what ‘Tone can do. You can see [quarterback Mark] Sanchez looking for him every game. That’s what he does. No question, he’ll be fired up. He’ll be ready. I’ll be ready, he’ll be ready.”

Holmes being fired up to go up against the Steelers means likely one of two things – he’ll either make a big play – or drop one. He was well known to do both in the past, and now we will see if he is a hero or goat for the Jets Sunday in the late afternoon affair.

“I think he’s an amazing player. And despite all the outside stuff people say about him, he was a good teammate,” Ryan Clark said He’s a good guy in the locker room — never any problem in the locker room, didn’t have an attitude, wasn’t arrogant — so it’s good to see him doing well.”

It won’t be so good if he does something to help the Jets get for them a much needed win on Sunday vs the Steelers. Here’s a vote that Holmes plays the role of the goat, something he did a couple times last year dropping passes in key moments.

Even though we’re still months from determining who’ll play in Super Bowl 2011, it’s never too early to start projecting which teams could make this year’s big game. Could it be the Atlanta Falcons? Matt Ryan’s crew has the best record in the NFC at 9-2. New England and the Jets also are 9-2 record, and share the top mark in the AFC. Could we see a surprise like Ben Roethlisberger’s Steelers? How about Peyton Manning’s Colts?