Tomlin Speaks His Mind on the Jets 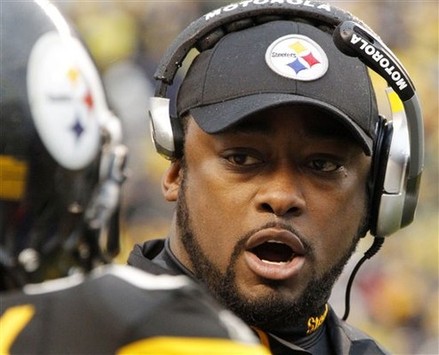 Q. The Jets rank 16th in the league in red zone offense. Do they have similar problems to the Steelers?

A. Yes, and probably for similar reasons. A lot of their key components who work in that area have been in and out. Santonio Holmes has missed some time, and some other guys have missed some time. When that’s a part of it, there can be something of a lull in production.

Q. The Jets have the No. 4 rushing offense in the AFC. How do you deal with that?

A. They have a two-headed monster, first with LaDainian Tomlinson and then Shonn Greene, who is a great supplemental alternative to him. They have a wildcat quarterback in Brad Smith, and we have a great deal of respect for his skill-set and what he’s capable of doing. There’s no question they’re going to attempt to run the football, to limit the exposure that Mark Sanchez gets to us. We have to turn them away because of that.

Q. Did Tomlinson simply need a change of scenery?

A. Sometimes a change of scenery is good. I don’t know what the intimate circumstances were in terms of his departure from San Diego, but I respect his body of work, and not only his body of work, but his recent body of work in 2010. He’s still a top-flight runner.

Q. What do you see when you study Mark Sanchez on video?

A. I see a very talented young guy who’s going through the natural maturation process and what comes with it. There are highs and lows, lulls in the action. This is a talented guy. He went to a high profile university, and he’s got some quality veteran leaders around him like Tony Richardson. He’s going to get out of the funk he’s in, but I just hope it’s not against us.

A. We acknowledge that they’re a good team. Really, there’s not much difference between us and the New York Jets in the big scheme of things. We’re 10-3 and they’re 9-4. We barely got out of Miami with a win, and they weren’t able to do it. And that’s about it. We have a big matchup against these guys. New England has soundly beaten us both here in recent weeks. I like where we are, and it’s going to create an awesome matchup. One that will be riveting.

Q. Does Rex Ryan run the same defensive schemes that he did in Baltimore, with all of the multiple fronts?

Q. Is Bart Scott their ring-leader on defense?

A. Not only on defense, I believe Bart is the ring-leader for the whole outfit. I believe he is the extension of Rex Ryan in a helmet, and that’s why he was brought to New York.

Q. What does Jason Taylor give the Jets?

A. He’s a situational player who hadn’t played a lot for them in recent weeks. They’ve already stated publicly they want to get him going again. He’s a Western Pennsylvania guy, a Woodland Hills High School guy. We can’t let him get going at our expense.

Q. What are the keys for the Steelers in this game against the Jets?