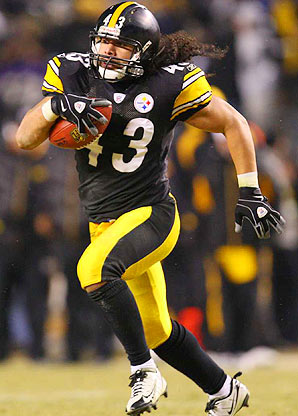 Troy Polamalu hasn’t played the past few games, but that didn’t stop him from taking home the teams Most Valuable Player award for the 2010 season. It is the first time in Polamalu’s eight-year career that he has received the honor, making him the first Steelers safety in 30 years to win the award.

“Football is such a perfect team sport. It’s hard to make anybody, especially on our team the way we play defense, a most valuable player,” said Polamalu. “If I was ever a coach, I would never have an award like this because it’s such a team sport. There are so many parts that go into making plays on the football field. I think people just vote because they have to vote.”

Polamalu, who was named to his sixth Pro Bowl and his fifth as a starter, is tied for the AFC lead and for second in the NFL with six interceptions. He was named AFC Defensive Player of the Week during consecutive weeks in December

Polamalu is the first Steelers safety to be named team MVP since Donnie Shell in 1980 and the first defensive back to win the award since Rod Woodson in 1993.

NFL Capsule – Steelers at Browns
Fines on Harrison Reduced by $25,000