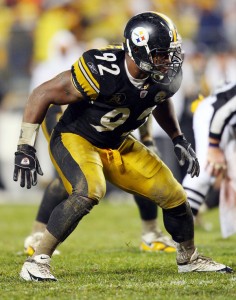 The pockets of Steelers LB James Harrison just got a little more full, as the league has announced they have reduced the biggest fine it levied the Steelers linebacker by one-third.

The fine was in question was the $75,000 find that Harrison was hit with his hit on Cleveland wide receiver Mohamed Massaquoi in Pittsburgh back on October 17th. Harrison had lost his appeal, but today the league reduced the fine by $25,000 to $50,000.

In a statement, the NFL said tonight:

“We can confirm the outcome of those appeals. The fines of Dunta Robinson of the Atlanta Falcons and Brandon Meriwether of the New England Patriots for flagrant hits against defenseless receivers have been reduced on appeal. The appeals officer, Ted Cottrell, reduced Robinson’s fine from $50,000 to $25,000 and Meriweather’s fine from $50,000 to $40,000. Following these decisions, Cottrell took the additional step of reviewing the appeal of James Harrison of the Pittsburgh Steelers. Harrison was fined $75,000 earlier this season for a similar flagrant hit. Cottrell consulted with Commissioner Goodell about reducing Harrison’s fine to $50,000 and the commissioner fully supported the decision. Cottrell said he reduced the fines because the players said they understood the rules and have made efforts to adjust their techniques to play within the rules that protect player safety.”