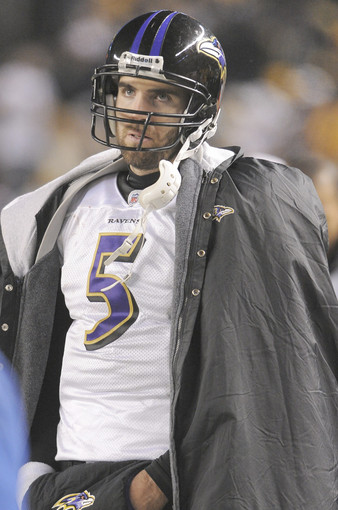 On a day when he had the chance to turn the corner against his biggest rival, Ravens QB Joe Flacco folded like a deck of cards as Baltimore once again was unable to put away their biggest rival in a 31-24 loss.

Flacco looked like he was finally going to get past his rivals, as he helped the team get to a 21-7 halftime lead. He did a solid job in the first half, throwing for 12-of-18 for 82 yards and a TD. His TD to Todd Heap came after a Rashard Mendenhall fumble, and the crowd at Heinz Field was silent as it looked like the season was going to come to a close.

Then came his downfall – the second half.

The Steelers defense made adjustments, and after the Steelers offense was unable to move the ball on their first drive, they punted to the Baltimore offense. After a sack and short run, Flacco completed a pass to Ray Rice, but he fumbled the ball. The Steelers fell on it, and two plays later scored to get within a TD at 21-14.

After a Ravens 3-and-out, the Steelers had a drive going but eventually had to punt. Then came Flacco’s next miscue, as he was looking deep for Heap, and overthrew him. Ryan Clark came over from his safety spot, making the pick which set up the teams tying score to make it 21 all.

Another Ravens drive, another Flacco mistake. The QB couldn’t get a clean snap from center Matt Birk, fumbling the ball which was recovered by the Steelers at the Ravens 23.

The rest of the half was a struggle as well for Flacco and the Ravens offense. The team was able to put a short drive together after a good punt return to set up a Billy Cundiff field goal to tie the game at 24.

Then after the Steelers went on the game-winning drive, Flacco had one last shot to save his teams season. He was incomplete on first and second down, sacked on third down, and on fourth down wide out T.J. Houshmandzadeh dropped a pass that would have continued the teams drive.

The gruesome numbers for Flacco in the second half – 4-of-12 passes for 43 yards and an interception and a fumble, and he was a big part of the team blowing a two touchdown lead as the Steelers outscored the Ravens 24-3 in the second half.

The Steelers continue to give Flacco nightmares. In three seasons with the Ravens, Flacco is 2-6 against Pittsburgh, and is 0-for-6 against his AFC North rival QB – Ben Roethlisberger.

“We had a good year this year. It’s just disappointing when you come up short,” said Flacco. “You feel like you have a team that can move on and win the Super Bowl. We have a special locker room, and guys are going to be disappointed. I’m disappointed.

“It’s tough to lose these kind of games, especially when you feel the way you feel about those guys. And how we felt as a team this year, which was pretty darn good. We felt we couldn’t be stopped at times.”

The turnovers turned the game around, but so did the inability for the Ravens to do anything with the ball in the last 30 minutes. Houshmandzadeh’s ended the game, but another drop, that of Anquan Boldin in the end zone, cost the team the ability to go up 28-24 with less than four minutes remaining. On the day the QB finished 16-for-30 for 125 yards.

One has to wonder just how much the Steelers are in Flacco’s head. For he and the Ravens, this one will for sure sting for quite some time.

“We don’t feel good about this one,” Flacco said. “When you look at those turnovers ? and then you could look at it and say we beat ourselves.”