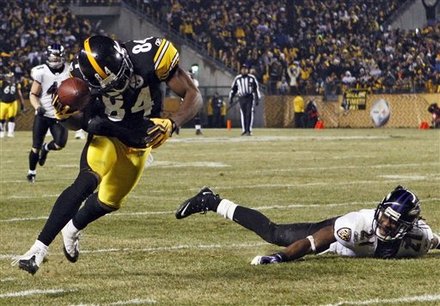 At the end of the day, it was the offensive play of the season at a time the team needed it the most. And of course it came from a player who early on in the season couldn’t even get on the active roster on Sunday’s.

But that’s all behind Antonio Brown, whose 58-yard catch to the Ravens four-yard line set up the game-clinching touchdown for the Steelers in their 31-24 win over the Ravens to send them to the AFC Title game.

Brown’s catch was huge, as it came on a 3rd-and-19 when it appeared the Steelers may have to punt the ball away which could have allowed the Ravens a chance to win the game in the final seconds.

It was not to be. The play was nothing more than a simple shot down the field, and it was one that Ben Roethlisberger asked for when he and offensive coordinator Bruce Arians talked about it before they ran it.

“Let’s just chuck it deep,” Roethlisberger told Arians just before he threw his biggest pass of the season. “If they pick it, it will be a pick way down there, just as good as a punt. … I just throw it as far as I can.’ “

And it worked. Brown got just enough seperation away from Ravens CB Lardarius Webb, and he was able to pull the ball in on a perfect throw. He ended up holding the ball against his helmet as he went out of bounds at the four.

“It was kind of amazing,” Brown said. “It kind of stuck to my shoulder.”

What’s more amazing is the guy who made the play. Brown had just 16 catches all season for 167 yards with one TD, and that came on a kickoff return to start the teams week two win in Tennessee.

It again shows just how much depth the Steelers do have at positions, as well as a big kudos to the scouting department that snagged Brown in the 6th round of the 2010 draft out of Central Michigan.

None of that mattered when the pretty pass landed in his arms and then shoulder as he made sure to have total control as he went out of bounds.

“It’s third-and-19, the game’s on the line, and the clock is real low, and we were in need of a play,” said Brown, who finished with three receptions for a game-high 75 yards. “Ben made a great throw and stuck it right on me, and I was able to come through with the catch. It was a great play.”

It also shows the confidence the coaches have in their two-time Super Bowl winning QB to try such a throw instead of just playing it safe and then punting, which would have shifted all the pressure to the Steelers D.

“It’s Ben. You give this guy an opportunity to snap it; he’s capable of producing plays,” Steelers coach Mike Tomlin said, “It’s not always how you draw it up, but he has a no-blink mentality. He is a competitor and a winner. And those guys follow him.”

And they did, and for that, Brown and the Steelers, it paid off in the biggest of ways. “I feel like we have a lot of quality guys, clutch guys who don’t blink in any type of situations,” Steelers receiver Mike Wallace said of Brown. “That’s big, for him to make that catch. It was third-and-19, and Ben put it out there, and AB caught it with one hand. It was crazy, but that’s the type of plays we need to go to the Super Bowl.”