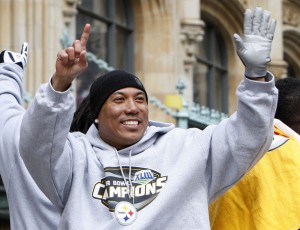 Congrats to receiver Hines Ward, who has been named the recipient of the 2011 Art Rooney Award. The award will be presented April 7th at the 38th annual Art Rooney Award Dinner and Auction at the Westin Convention Center Hotel. The event benefits the Catholic Youth Association.

The Rooney Award honors individuals who have made outstanding contributions to the Pittsburgh area in fields such as business, sports, politics, philanthropy, education and science.

In other Ward news, the wide out has squashed talk about him walking away from the game after this season. Ward has stated “several times, including the past week” that he has no plans to retire this offseason.

Ward suggested last offseason that he would walk away from the game if the Steelers win Super Bowl XLV, but it sounds like he’s now committed to play at age 35.

Schefter: Pouncey Officially “Out” for Super Bowl XLV
Checking Out the Super Bowl Schedule for the Steelers