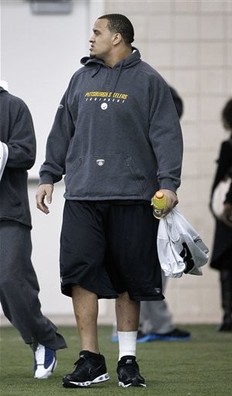 The Steelers are ready. They will play for their 7th title on Sunday, but will do it without a veteran leader on the D-line, and also their rookie Pro Bowl center. The team placed Pro Bowl center Maurkice Pouncey on injured reserve and signed center-guard Dorian Brooks from the practice squad on Saturday.

Pouncey was ruled out Friday by coach Mike Tomlin after he suffered a high left ankle sprain in the AFC Championship Game against the New York Jets nearly two weeks ago. Backup Doug Legursky will start at center in Super Bowl XLV Sunday.

Brooks has never before appeared in an NFL game, and is not likely to be active against the Packers. Veteran D-linemen Aaron Smith won’t play, as he hasn’t been able to take the field since tearing a triceps vs the Dolphins in Miami.

Win a FREE Harmony 300 Remote for the Big Game and Beyond!
Super Bowl XLV vs Green Bay Packers: Keys and Prediction