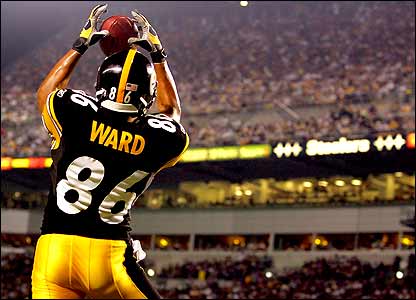 While it was kind of a kick in the stomach that both Dermontti “Dirt” Dawson and Jerome Bettis didn’t make the Hall of Fame, I still think that both those players are going to eventually have busts in Canton someday.

There’s plenty of talent all over the roster right now, with some players already being “locks” for Canton according to the media. ProFootballWeekly.com has an article out about current NFL players that are Locks, On Their Way, Maybe/Maybe Not, Don’t Hold Your Breath, and Need More Data. Here’s the Steelers on the list, along with some thoughts on if they will get there or not.

There’s no Steelers on the list that are “Locks,” according to the article.

Steelers “On Their Way”

S Troy Polamalu, Steelers — A Defensive Player of the Year award can only help his Canton résumé.

Thoughts – The end of the year fall off due to injury didn’t help Polamalu, but he’s still a big part of this franchise, and he’s the face of the franchise along with Ben Roethlisberger. I can see him getting there, but the injuries the past two seasons haven’t helped him and the team really could have used a 100 percent Troy at Super Bowl XLV.

WR Hines Ward, Steelers — As was said during Super Bowl week, Ward has almost as many yards as Hall of Famers Lynn Swann and John Stallworth do combined. Any receiver would love to have that on their résumé.

Thoughts – This to me is a no-brainer. He’s the all-time leading WR on a team that has boasts a record 6 Super Bowls. Ward is also going to go down as the toughest blocking WR in the history of the league. Like Bettis, may get passed over once, but will have his spot in Canton.

Thoughts – Putting him on this list as a Steeler, since his best seasons were in the Steel City. A former #1 pick, he was very good leading the way for Jerome Bettis, then who can forget the record-breaking run that he sprung in Super Bowl XL for Willie Parker. Not sure if he makes it, but he will get consideration.

Thoughts – The one that will get talked about the most, Roethlisberger’s loss a few weeks back should not hold him back from being seriously talked about for Canton. If he continues on the current pace, he’ll get to another title game or two, and probably walk away with at least one more ring. How lucky were the Steelers to grab him at #11 in 2004?

There’s no Steelers on the list that are “Maybe, Maybe Not,” according to the article.

ILB James Farrior, Steelers — Does a lot of things at the linebacker spot — as Pittsburgh guys are asked to — but did not distinguish himself in any one area.

Thoughts – One of the great Steelers on and off the field, but like the article says, probably hasn’t done enough in any one area to get a bust in Canton.

OLB James Harrison, Steelers — Harrison’s words this year will sting, but his hits and raw playing style will resonate.

Thoughts – Will need a couple more seasons of making headlines. Problem is, the headlines he makes are ones that people don’t usually associate with Canton. His age and the fact he’s been the NFL’s “Bad Boy” are two things going against him.