Tiki Barber Has Interest in the Steelers – Do the Black and Gold Have Interst in Him? 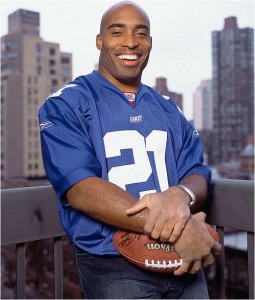 Nothing like a good rumor to get you past your Thursday. This one to me is REALLY a stretch, and has to do with former Giants back Tiki Barber, who at 36 wants to come out of retirement to play in the NFL again.

The following is from the NY Post (never known to try and stir the pot on anything)!

The Steelers have emerged as a potential landing spot for Tiki Barber, according to two sources. The Giants are not going to impede Barber’s attempt to find a new team and are likely to give permission to Barber and his agent, Mark Lepselter, to start the process of drumming up interest — without any tampering fears by other teams — while the CBA negotiations are ongoing

The Giants have already said they will release Barber and let him go elsewhere, and to me from the words of some of his former teammates (Michael Strahan), this guy sounds like a cancer.

The Steelers could in fact use another backup running back to Rashard Mendenhall, but I have no idea what fascination they would have in bringing in a 36-year old who has been out of football since following the 2006 season.

Barber’s agent, Mark Lepselter, was quoted as stating in the paper – “Tiki wishes the Giants the best and they have wished him the same. “In light of the fact that they will not be retaining his rights, and have stated such publically, we are hoping that we can begin speaking with other teams as soon as possible.”

In the end, it could be and probably is just his agent trying to get interest, but like stated above, I find it hard pressed to believe that the Steelers really have any interest in Barber.