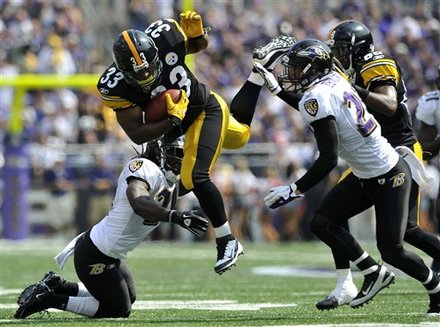 Just an awful day, and it didn’t get much better in Baltimore in the third quarter. The first Steelers play they fumble on what looked to be a nice play by Haloti Ngata, and right away the Ravens get the kill with Flacco hitting TE Ed Dickson for a TD.

Then if that’s not bad enough, they go for and run in a perfect fake on the PAT kick, but why you would use that up three TD’s on opening day is beyond me.

Ray Lewis then gets a pick on a tipped pass, and at least that time the D finally made a play on 4th and 1 to stop Rice and stop any scoring for Baltimore.

Roethlisberger gets down the field with some nice passing, but of course on a broken play throws his 2nd pick of the day, this time right to Ed Reed who was waiting for it as it was intended for Heath Miller.

The rest of the quarter was a complete waste, as until it got chippy at the end of the quarter, you might as well have taken a nap. Quarter ends with the Ravens up 32-7, and I’d love to be a fly on the wall when Tomlin talks to the team after the game.