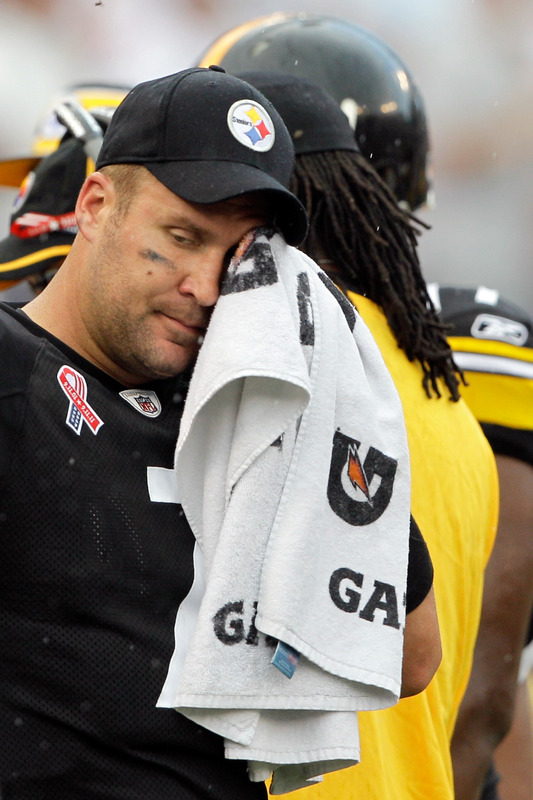 Other than that, not much good could be said from a Steelers standpoint on Sunday, as the Black and Gold’s 8-game opener streak was demolished in embarrassing fashion, losing to the rival Ravens 35-7.

How bad was it? The Steelers trailed 21-7 at the half, and got the ball to start the third quarter. They fumbled on the first play, and the Ravens quickly scored to make it 27-7. Then to put salt in the wound, the Ravens went for two and got it to make it 29-7.

On the next Steelers play, QB Ben Roethlisberger was picked on a tipped pass by Ray Lewis. It wasn’t shocking to see the Steelers turn the ball over, they did it 7 times on the day.

Baltimore’s beating of the Steelers was as complete as any team had beaten the Black and Gold in a long time. Ray Rice ran for 107 yards on 19 carries, (5.6 per carry), and Joe Flacco had plenty of time all day to throw, hitting for 17-for-29 for 224 yards and three TD’s with no picks.

The defense, out of position it seemed like all day, never got a sack on Flacco, and couldn’t stop Rice, who ran all over them for a total of 149 yards and two touchdowns.

The Steelers offense also didn’t do much to inspire, as the run game was held to 66 yards on 16 carries, with Rashard Mendenhall going for 45 yards on 12 carries.

Roethlisberger was 22-for-41 for 280 yards with a touchdown and three picks. He was also sacked four times for a minus 34 yards.

The Ravens led it 14-0 at the end of the first quarter, and then the Stelers made it a game for a minute when Emmanuel Sanders caught a 11-yard TD to make it 14-7 with 10:23 left in the first half.

It was all Baltimore from there, as they scored on a Rice 11-yard TD catch with 1:48 left in the half, and then they ran away from it with 14 second half points.

The Steelers allowed a 100+ yard rusher, and also 35 points, something they very rarely do. If anything, maybe Sunday was a wake-up call.

If not, the good feelings everyone had entering 2011 could go away real fast. They have a week to make corrections before they host the Seattle Seahawks next Sunday at home.