Tomlin – “We Got Handled in All Three Phases Today” 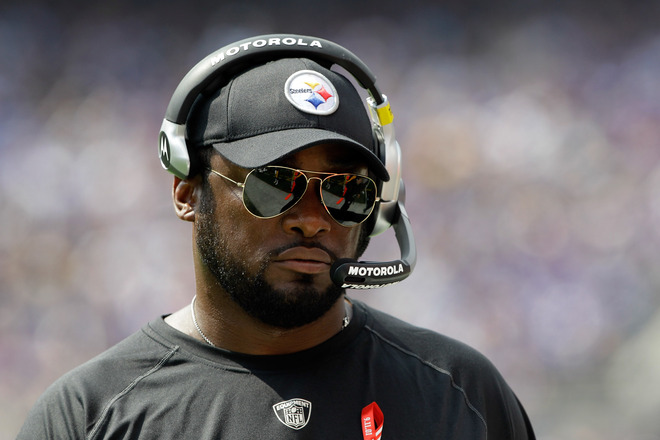 (opening Statement) “That’s pretty easy to assess, Ladies and Gentlemen. We got handled in all three phases today. We accept responsibility for the plays that we made and didn’t make. We compliment them at the same time for the way that they performed in all areas. Obviously, we have a lot of work to do. We didn’t stop those guys enough. We didn’t turn around enough ball carriers. We didn’t get off enough on third down. We didn’t create turnovers. We never found rhythm. When that happens versus a good team you’re going to get beat the way we got beat today. We don’t like it, but we accept it, and we’ll respond accordingly. No significant injuries to mention in the game. [LB] James Harrison went off, we’ll call it a knee contusion at this point. Until further review, but it doesn’t appear to be serious. All the others are bumps and bruises that go along with getting dominated the way we got beat today.”

(on LB James Farrior taken out) “We had made a commitment to play [LB] Larry Foote some. Larry had a good preseason. We respect both men. We know that both men are capable of standing in front of our defense to making calls, and we would like to play both men. So we made a commitment early on that both men were going to play, and we stood up to it. Same thing could be said in some other areas; D-line rotations and corner rotations and so forth.”

(on the defense looking slow) “You know, we just didn’t make enough plays. I’m not ready to judge it from a speed standpoint. We didn’t turn around enough ball carriers. We didn’t get off well enough on third down. We didn’t create turnovers. So…Usually speed is a part of that equation but I’m not ready to say that at this juncture.”

(on the Ravens’ unknowns) “I don’t’ think that was a major factor in the game, talking about the unknowns. I just didn’t think that we executed well enough to be competitive and they did.”

(on the start of the third quarter) “They got a couple quick turnovers and short field positions and took advantage of at least one of them. Of course, you can’t shoot yourself in the foot. It’s not hard to figure out. You turn the ball over the way we did today, and you don’t get turnovers, you’re going to get beat up pretty good. And that’s what happened”

(On QB Ben Roethlisberger’s interceptions) “You know, a couple of plays broke down, he’s trying to make something happen, and we’re down. One was tipped. I’m not going to try and make excuses for it. They are what they are, you have video evidence. We didn’t perform well today.”

Game One: Ravens Make Statement, Dominate Steelers 35-7
Colon Could Be Lost For a Significant Amount of Time with Arm Injury