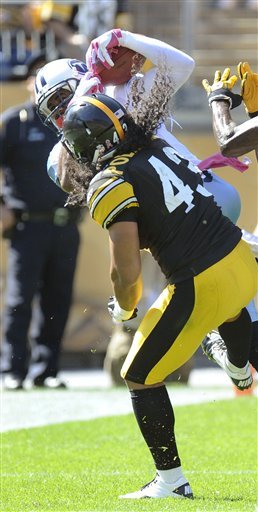 A trick play and a huge run helped the Steelers net an 18-point lead, up 21-3 at the half. The defense stuffed Chris Johnson, who has just 42 yards on the day so far, and the Steelers are gang tackling him every time he touches the ball.

Ben Roethilsberger (15-for-22, 114 yards) deserves a game ball for just the first half. He’s limping, and can’t really run, yet has thrown three TD passes, and playing in pain is doing a good job with the offense. Love the trick play on the punt, and it paid off with a big play to Ryan Mundy.

Jonathan Dwyer got his first carry of the year, and it paid off in a huge way, a 78-yard gain on the same play that sprung Willie Parker for a 75-yard TD in Super Bowl XL.

Hines Ward, Heath Miller and David Johnson all have touchdowns. About the only bad play of the half was the pick by Ben to Courtland Finnegan with 9 seconds left in the half that could have netted the team another three. Hopefully they won’t regret that later on.