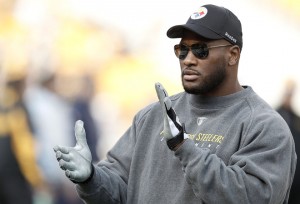 Steelers big-play linebacker James Harrison will return to play against Baltimore Sunday night after missing four games with a broken orbital bone around his right eye according to Ed Bouchette of the Pittsburgh Post-Gazette.

“I think that is possible,” said Bill Parise, Harrison’s agent, told the Pittsburgh Post-Gazette this afternoon. “Unless something happens, he will play this week.”

Parise said Harrison’s eye improved tremendously from Thursday to Saturday and the four-time All-Pro linebacker wanted to play but doctors would not let him.

The Kent State alum, who has been out since Week 4, has 23 tackles (18 solo), three tackles for loss, two sacks, and a forced fumble on the season.

Polamalu’s Slap at the End of the Game was Illegal
James Harrison via Twitter: “Looks like I won’t be playing this weekend”