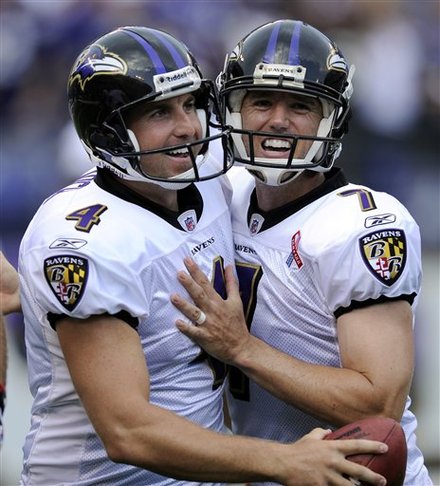 Here it is yet again, another put up or shut up time as the Ravens come to town for a week 9 battle with the 6-2 Steelers. A win by the Steelers and they are in complete control of the division with a game and a half lead. A loss, and things are back to square one as the Ravens will be back in first, and will have swept the series.

The Steelers have plenty of injury issues, and while their offense is playing at a high level, they will need to find a way for a number of backups to stop the Ravens. Below are the keys of the game for the Steelers, as well as our prediction.

1. Hold the Ball – The Steelers held the ball for almost twice as long as the Patriots last week, taking some pressure off of their injury-plagued defense. Linebackers James Harrison and James Farrior were out, as was defensive end Aaron Smith. Linebacker LaMarr Woodley also suffered a hamstring issue towards the end of the game, putting his status for this contest in doubt. If they want to keep pressure off the defense, the run game and Ben Roethlisberger have to play well. They have to find ways to not have a bunch of three and outs.

2. Keep Ray Rice in Check – The Steelers’ defense has allowed just three 100-yard rushers in its last 58 games dating back to 2007, but Rice has two of them. That includes 107 yards in the Week 1 victory and a 141-yard effort in Pittsburgh back on December 27th, 2009. He played outstanding in game one vs the Steelers, and if they want to beat the Ravens, they have to hit him hard, and not allow him to run wild. In the playoff game last year, they forced him to fumble, and it got in his head. Best bet if they want to win – repeat that again.

3. No Excuses – Ok, let’s be real for a second. No Woodley (most likely), no Harrison, no Farrior. It’s not going to be easy. But these are NFL players getting paid NFL money, and Dick LeBeau has to trust whoever plays at the LB spots and throw everything at them just like they would the three starters. While the LB spots are hurting, the other defensive spots are not, and those guys also have to step up. It would be nice to see Ike Taylor, who is having a Pro Bowl year, and Brett Keisel, who has been outstanding this season, both make some big plays and force turnovers.

Prediction – The Steelers are back to being the 2nd best team in the league next to the Packers, but the injuries are really catching up with them. Three starting LB’s possibly missing the game, including both LaMarr Woodely and James Harrison. They will rely on Roethlisberger to have another huge game against the Ravens, and Joe Flacco has had some pretty miserable games in Pittsburgh. Even banged up, Mike Tomlin will have the Steelers seeing fire after the 35-7 loss they suffered opening day. Pittsburgh 23 Baltimore 14

Need an affordable accommodation in Pittburgh? Check Cheap Hotels for the latest deals!