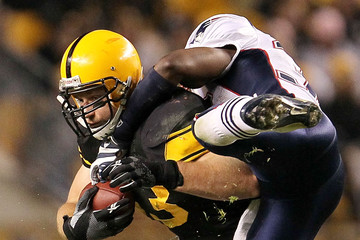 Heath Miller is on the verge of setting a Steelers record on Sunday. If he makes five grabs, he will become the all-time leader in catches for the Black and Gold.

When Steelers offensive coordinator Bruce Arians implored his unit Wednesday to focus on team goals rather than individual accolades, veteran tight end Heath Miller likely didn’t need the reminder. When told that he was five catches away from the Steelers record for tight ends, Miller shrugged his shoulders. “I didn’t know that,” he said.

“It is what it is. I’m sure at some point you can take time to look back and reflect on things, but now is not the time. Hopefully, now we’re just focused on winning games at the end of the year. Those things will come as you win.” Miller has 324 catches in his career, trailing only Elbie Nickel’s 329. His four catches in Week 7 moved him past Franco Harris for sixth place on the all-time Steelers list. After a somewhat slow start, Miller has seen his role in the passing game increase in recent weeks. With the exception of a five-catch showing against Indianapolis in Week 3, he caught three or fewer passes in each of the first five games.