Thursday Injury Report With Details on Ben, Pouncey and Sanders 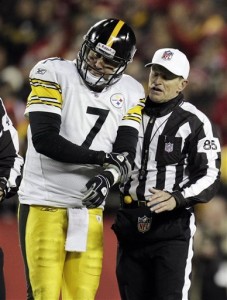 QB Ben Roethlisberger hit his right hand on a helmet throwing a pass in practice Thursday and bowed out early. He and his coaches say he should be OK. Roethlisberger played last week with a splint and a glove to protect a broken right thumb.

SS Troy Polamalu returned to practice Thursday for the first time this week after leaving the game in Kansas City during the first series with “concussion-like symptoms.” Polamalu has passed all his concussion tests this week.

C Maurkice Pouncey returned to a partial practice Thursday, 10 pounds lighter as the result of a severe stomach virus that knocked him out of last Sunday’s game after 18 plays. Pouncey said he lost 12 pounds, and has gained two back. He is expected to play.

LB Larry Foote, who alternates at inside linebacker with James Farrior, has a hamstring injury that has limited him through the first two days of practice this week. He is likely to play.