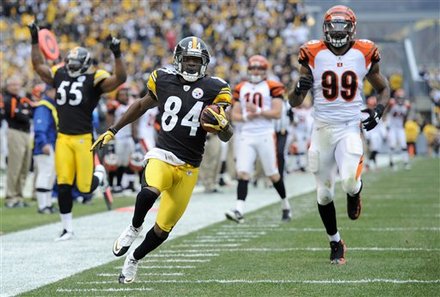 Last Sunday night in KC, the Steelers almost gave away a game to a bad Chiefs team, but in the end hung on to win.

Sunday at home against the Bengals, they took out their frustration on a team that felt they would be able to hang with them for four quarters.

With a 28-point second quarter that included a 60-yard punt return for a score, the Steelers beat up the Bengals 35-7 to improve to 9-3 on the season.

The game was highlighted by a second quarter that included two rushing TD’s for Rashard Mendenhall, a passing one from Ben Roethlisberger to Mike Wallace, and a punt return by Antonio Brown to put the game away 28-7 at the half.

The second half was mostly the Steelers pounding Bengals rookie QB Andy Dalton, and the offense getting a chance to practice their run blocking, as the team ran for 136 yards in the victory.

The Bengals looked like they would make it interesting at the start, as on their first drive they blew what should have been a first quarter score that would have put them up 7-0 early.

The Bengals had an apparent touchdown to Jerome Simpson called back due to a false start on their first drive. Then two plays later Mike Nugent nailed a 28-yard field goal to make it 3-0.

A delay of game cost the Bengals five more yards, and then the next play Nugent’s 33-yard attempt was blocked by Cameron Heyward, stopping the Bengals from what could have been an early lead.

From there, the Steelers took over. They ran the ball down the Bengals throats, and got a big play from Brown to set up a Mendenhall score to make it 7-0.

Mendenhall went in from five yards out after a pass interference to make it 14-0. The game got more out of hand after a fumble on the kickoff, and Roethlisberger hit Wallace to make it 21-0 with 8:33 left to play in the first half.

The Bengals got their only score of the game on the next drive, as they got a Dalton 11-yard TD pass to A.J. Green to cut the three touchdown game to two at 21-7.

The game changed for good right before the half, as the Bengals went 3-and-out right before half, and kicked away to Brown, who got the benefit of a block in the back that wasn’t called, and went 60 yards for a TD to make it 28-7 at the half.

The second half saw the Steelers get one TD, another Wallace touchdown from 19 yards out with 3:26 left in the third quarter to make it 35-7.

Dalton was pulled in the game in the fourth quarter after he was hit a lot, and was sacked three times. The Steelers defense allowed the Bengals just 235 yards in the loss.

It’s a short week for the Steelers, as they host the Browns on Thursday night at Heinz Field.