Tomlin Talks About the Dominating Win Over the Bengals 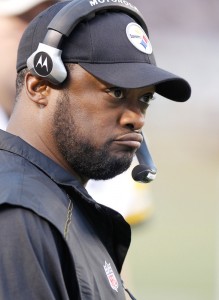 Coach Mike Tomlin: It was great to get the win in our place. It was a very necessary AFC North winning performance by our guys. We fell short in some areas but we always will. We aren’t going to complain about that. I loved the energy of the group in all three phases. I thought our special teams really provided a shot in the arm for us in the early going, blocked a field goal attempt and recovered the kick, and late in the second quarter we returned a punt for a touchdown. We made splash plays in all three phases. It’s what you have to have. I thought our special teams anteed up in a big way today. We have a short week. We have some more AFC North football waiting for us. We will celebrate and rest quickly, and move on in preparation for Cleveland. There were some minor injuries, bumps and bruises along the way, many of which I won’t mention. Ramon Foster did have a left ankle sprain. He was not able to return to the game. We will see where he is for Thursday night. LaMarr Woodley felt a little tweak. There’s no major damage. He might be in play for Thursday night but we didn’t want to do any further damage to him today. We will see where we are. We will move on to preparing for Cleveland. Our guys have to do a good job above the neck, preparing and taking care of their bodies on this short week.

Did any special teams play stand above the others?
The guys made plays. We’ve gotten solid contributions from guys in that group. They take a great deal of pride in what they do. They are a legitimate phase of our team, and we appreciate their efforts.

Re: Running game, especially in the red zone:
I was pleased but there are new and greater challenges that lie ahead. It’s about sustaining it and improving it moving forward into December.

How were you able to defend Andrew Hawkins so well?
I think more than anything, we were able to break the pocket down with pressure. It didn’t necessarily manifest itself in terms of sacks but we broke the pocket down. We got Andy Dalton moving a little bit. I think that helped us from a coverage standpoint, whether it’s Andrew Hawkins or any of the others.

Re: Team having a sense of urgency in December:
I am kind of an idealist and a football purist. I’d like to think we are capable of having that sense of urgency in September, because we only get 16 opportunities to state our case. Acknowledging that we all fell short of perfection, the picture is a little bit clearer this time of year.