Harrison to Find Out Soon if a Suspension is Coming 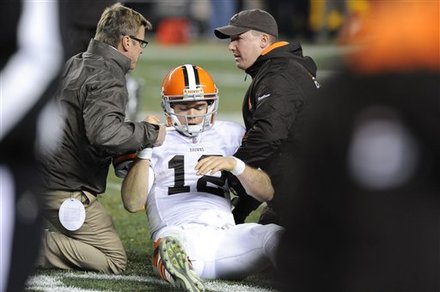 If the NFL decides to suspend Steelers OLB James Harrison for his hit on Browns QB Colt McCoy in Thursday night’s 14-3 win in Pittsburgh, it will not be a decision that the former NFL Defensive Player of the Year agrees with.

“I don’t think a suspension is worthy,” Harrison said Monday. “I don’t think it’s worthy of anything, but that’s just my own personal thoughts.”

Harrison should find out soon if he’ll get suspended and/or fined for his helmet-to-helmet roughing the passer hit, one that sent the QB to the bench with what now is being called a concussion in the Steelers 11-point win.

Harrison says rightly so that McCoy left the pocket, rendering him fair game as a ballcarrier. McCoy actually stopped to pass the ball on the play.

“Well, he took off running with it, and at the last second he, like, chucked and ducked,” Harrison said.

McCoy briefly left the game, a controversy in itself as his father felt the Browns neglected to properly assess him for a concussion. The team said symptoms didn’t manifest themselves until the game was over.

As for Harrison, he’s use to seeing his pocket book get slapped for hits. Last season he drew $100,000 worth of fines for hits during the regular season.

“I feel like he’s trying to put people out of the game,” Browns WR/KR Josh Cribbs, a teammate of Harrison’s at Kent State, said Monday. “As a linebacker, that’s what his job is. That’s how he’s been in college, he tried to put me out of the game when I was on his team, with a red jersey on. That’s why he’s been so successful in this league. That’s also why he’s been highly fined in this league as well, but also successful.”